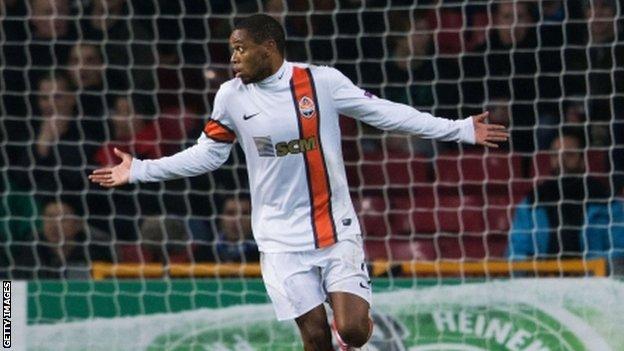 Shakhtar Donetsk striker Luiz Adriano has been charged by Uefa after his controversial goal in the 5-2 Champions League win at Nordsjaelland on Tuesday.

Adriano scored a hat-trick in the win, with his first coming after Willian attempted to return the ball to the opposition goalkeeper from an uncontested drop-ball.

A Uefa statement said: "Luiz Adriano faces charges for violation of the principles of conduct."

His case will be heard on November 27.

I don't know if Shakhtar are bandits, but some of their players, bosses and coaches are without morals

Adriano's opener came after play was stopped for a home player to receive treatment.

Willian then cleared the ball downfield when play resumed, but Adriano ran on to the ball to score - which prompted an angry reaction from the Danes.

There was then confusion when Nordsjaelland kicked off, with Shakhtar initially standing off and allowing them to dribble towards goal before making a tackle and playing on.

Shakhtar coach Mircea Lucescu said after the game: "I asked my players what happened. Adriano said: 'It was instinct, I see the ball and I dribbled and I scored a goal'.

"We wanted to let them score, there was big confusion in the team. They deserved to score, it's a pity that this happened. I'm sorry."

Nordsjaelland coach Kasper Hjulmand said: "I don't know if Shakhtar are bandits, but some of their players, bosses and coaches are without morals.

"In my world it's unsportsmanlike conduct and a red card for Luiz Adriano would have been quite appropriate.

"[If my team did that] I would have called the team to the side and told them to give away a goal. I would have done that, 100%."

Arsenal offered to replay an FA Cup match against Sheffield United in 1999 when Nigerian striker Kanu scored in similar circumstances.