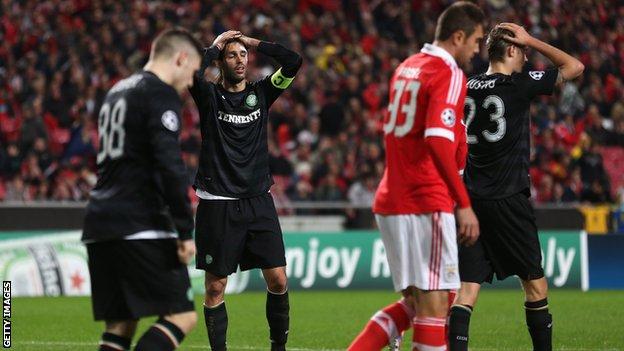 So, the Lisbon fairytale was not to be for Celtic and their followers.

After stirring Champions League performances away to Spartak Moscow and Barcelona, a repeat in the Estadio da Luz was a bridge too far for a team Neil Lennon says is running on empty.

Lennon had warned that Benfica would prove equally as testing opponents on home soil as Barcelona had in Camp Nou.

That proved to be accurate, but unlike the earlier match, Benfica found gaps in the Celtic defence easier to come by than Barcelona had and Fraser Forster had to improve his already burgeoning reputation to keep the score down.

But the more concerning aspect of Celtic's play in Lisbon was sloppiness - possibly a result of physical and mental fatigue - that had not been present in the previous group-stage games.

On several occasions, not least in the build-up to the first Benfica goal, Celtic were guilty of gifting the Portuguese side the ball, a monumental faux pas in the Champions League, where possession is cherished.

If tiredness was the cause then Lennon will have to ensure his top players are well rested before Spartak Moscow come to Celtic Park on 5 December.

Even though the Russian side have little to play for, Celtic cannot afford to be at anything other than their best as they seek to clinch second place in the group.

Benfica coach Jorge Jesus was adamant after Tuesday night's match that they and Barcelona were the two best teams in the group and, in purely technical terms, he is probably right.

But if the group table after the final round of matches shows his side below Celtic then Lennon's side will be fully deserving of qualification.

Their performances against the Portuguese have been their two poorest of the campaign, though the first marked the Champions League debut of 10 of Lennon's starting line-up, which was also missing a number of first-choice players.

But, unlike Benfica, Celtic have been able to win in Moscow and at home against Barcelona.

So, if things go their way on matchday six, neither Jesus nor anyone else will be able to make a strong case against the merits of their progress.