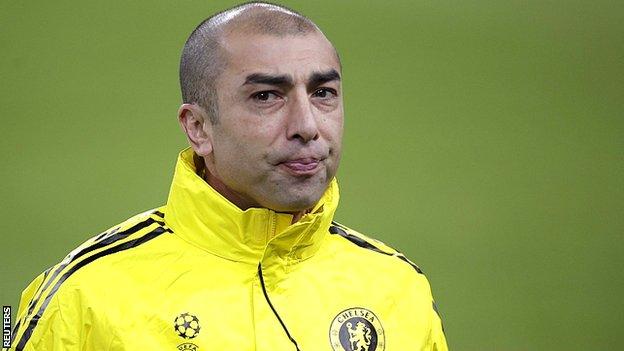 Roberto Di Matteo has spoken of his "deep and unreserved passion" for Chelsea despite being after just eight months in charge.

Di Matteo won the Champions League and FA Cup as caretaker boss and earned a two-year contract, but he was dismissed after

"I am extremely proud of the successes and trophies that we were able to bring to the club," said the 42-year-old.

"The LMA shares Roberto's disappointment following Chelsea's decision to relieve him of his managerial duties. What cannot be questioned is Roberto's passion for the club and the honesty and integrity he has shown throughout his time in charge.

"His record of a Champions League title and FA Cup triumph speaks for itself, and he can be incredibly proud of what he has achieved in such a short space of time.

"Roberto has received a huge number of messages of support from across the game; from other managers, coaches, administrators at other clubs, Chelsea supporters and the Chelsea players themselves.

"I know he is extremely appreciative of receiving so much support and solidarity, and it demonstrates the high regard and respect that those in the game have for Roberto."

"I have a deep and unreserved passion for Chelsea Football Club."

Di Matteo joined Chelsea as a player in 1996 and scored 26 goals in 175 appearances before retiring because of injury at the age of 31.

He managed MK Dons and West Brom before taking over at Stamford Bridge following the sacking of Andre Villas-Boas in March.

The Champions League and FA Cup triumphs saw his interim position made permanent and Di Matteo began this season with nine wins from 12 matches.

But defeat at Shakhtar Donetsk in the Champions League marked the start of a run featuring only one win in eight fixtures.

Di Matteo's final game in charge was the 3-0 defeat in Turin, which left Chelsea on the brink of Champions League elimination.

"It was an honour for me to be appointed manager of a club that I loved playing for and one that is so close to my heart," he added.

"Lifting Chelsea's first Champions League trophy, in Munich, was the best achievement in the club's history and without doubt the highlight of my career to date, both as a player and manager. It is a memory I will treasure for the rest of my life.

"I would like to sincerely thank all of the staff, my players and of course the Chelsea fans, for their tremendous and unconditioned support in the intense time I have been the manager at the Bridge.

"I wish all of them every success for the rest of the season and beyond."

It is understood Di Matteo was informed of his departure in the early hours of Wednesday by Chelsea chairman Bruce Buck and chief executive Ron Gourlay at the club's training ground.

He has been who was named interim manager until the end of the season.