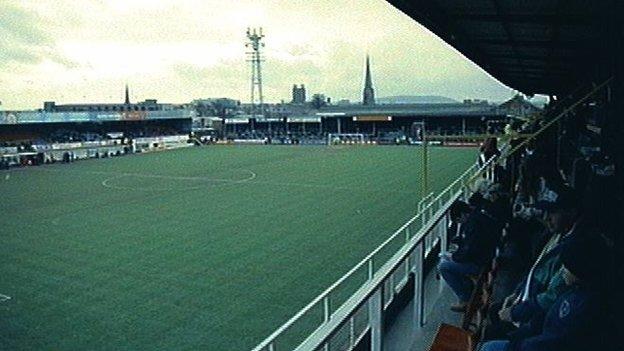 Hereford United have reached an agreement with Revenue and Customs over the settlement of their unpaid VAT and PAYE bills, which has enabled the Bulls to have their transfer embargo lifted.

The £70,000 payment they are due to receive from having their FA Cup second round tie at Cheltenham televised has eased their financial problems.

But it left manager Martin Foyle with too little time to make any signings.

The transfer loan window closed on Thursday at 17:00 GMT.

"It's great news from a personal point of view," Foyle told BBC Hereford and Worcester. "But it only gave me 24 hours to try to move something or try to find something.

"I made a lot of phone calls, but it was a tough ask, All the players I had targeted had got fixed up elsewhere.

"Fair play to the chairman and the board of directors, and also the supporters who have funded the club over the past few weeks,"

The Blue Square Bet Premier club owe around £120,000 in VAT and PAYE payments to HMRC, but have gradually been refilling their coffers since chairman David Keyte first warned last month that they were close to going into administration.

The FA Cup first round win over Graham Turner's Shrewsbury Town on 3 November generated £38,000 - a combination of prize, gate and TV money.

They are now due £70,000 in TV funding alone from the Cheltenham game (which will be covered by ESPN) and they have also netted a further five-figure sum from a sponsorship deal for the club's dugouts.

Added to that, Bulls fans have raised more than £20,000 from a host of different fundraisers, including head shaves and bucket collections, while one group of fans are to undertake a 20-mile sponsored walk from Malvern to Edgar Street this Saturday (24 November).

"I would particularly like to thank all those supporters and friends of the club who have dipped into their pockets," said Keyte.