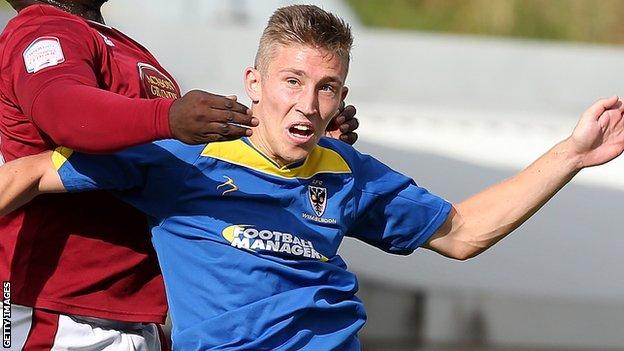 The 20-year-old and will be cover for Brian Saah and Aaron Downes.

"It's one position that's always worried me and now we have four genuine centre halves," said boss Martin Ling.

MacDonald at the start of the season and played six games.

I didn't come down to sit on the bench

"Saah and Downes have done well all season and Kirtys MacKenzie has come in and done a good job," Ling added to BBC South West Sport.

"But Downes is on four bookings and for the next six weeks you can't fetch anybody in."

And MacDonald hopes he can add to the three games he played for the Gulls last season.

"I enjoyed the spell I had at the end of last season. It's a great club to be at so I was looking forward to coming down.

"Now Reading are in the Premier League it's going to be hard to break into their first team so there's the Under-21 league which I've played most the games in.

"For my position it's just about getting experience at this moment in time, so hopefully I can come down here and play some games.

"I didn't come down to sit on the bench, so if I do well in training hopefully the gaffer will see that in me and put me in the team."