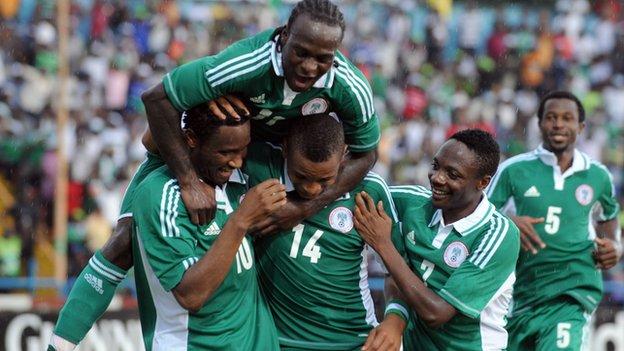 Nigeria have lined up an international friendly match against Catalonia in preparation for the 2013 Africa Cup of Nations.

The game, against the side coached by Dutch legend Johan Cruyff, will take place at Estadi Cornellà El Prat, home ground of Spanish side Espanyol, on 2 January.

Catalonia, like other Spanish regions such as the Basque Country, compete in friendlies against international teams but are not permitted to play in official competitions.

The Nigeria Football Federation (NFF), though, is delighted with another "high-profile" friendly for the Super Eagles.

"It has been finalised that the team will travel to Spain for this friendly against Catalonia," said NFF spokesman Ademola Olajire.

"This match is another crucial step in our preparations for the Nations Cup in South Africa.

"The players and officials are all looking forward to another opportunity to continue building momentum after the victory against Venezuela in Miami.

"The Catalonia side will provide a tough test at the right time for us."

It will be the second meeting between the West Africans and Catalonia. The first match, in December 1998, ended in an emphatic 5-0 defeat for Nigeria.

And the Catalans may be looking to achieve a similar result to provide a fitting send-off for Cruyff, whose tenure as coach comes to an end after this match.