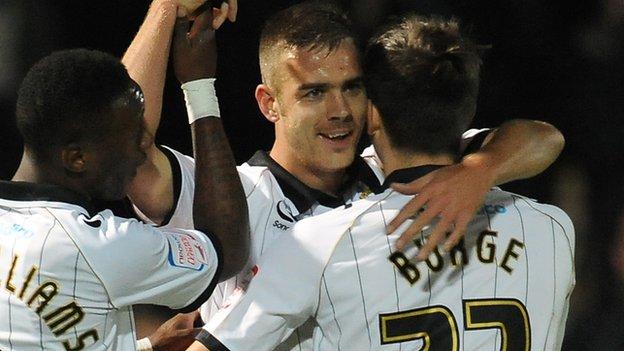 Port Vale fans have been reassured by their new owner that there is no risk of losing the Football League's top scorer Tom Pope in the January window.

Having previously hit 29 goals in 163 league games for Crewe, Rotherham and Vale prior to this season, the striker has been a revelation this term, smashing 19 in 19 League Two games.

But, by reaching 15 goals, he triggered an added year to his contract.

"That's something the fans need not worry about," said owner Paul Wildes.

"Tom was on a 12-month contract, but that's automatically extended now for a further 12 months.

"Tom has been an integral part of the club over the last few months," said the Wirral-based businessman, who completed his £1,25m takeover on Tuesday evening. "And that was part of his contractual terms."

Having ended a rare two-game drought by hitting a hat-trick in Tuesday night's 4-0 win over Bristol Rovers, Pope became the quickest Vale player to score 20 goals in a season since 1925.

But, after signing his new deal, the 27-year-old boyhood Vale fan from Sneyd Green is intent only on winning promotion at the end of the season for the first time since 1994.

"Obviously the gaffer's going to have a bit of money now and is going to bring in one or two new faces to freshen things up," Pope said.

"As long as we get promoted, that's the main thing.

"Growing up, my dad told me all the stories about us getting promoted that day at Brighton in 1994.

"Ever since I started supporting them I've wanted a day like that and I hope to be part of the team that makes it happen."