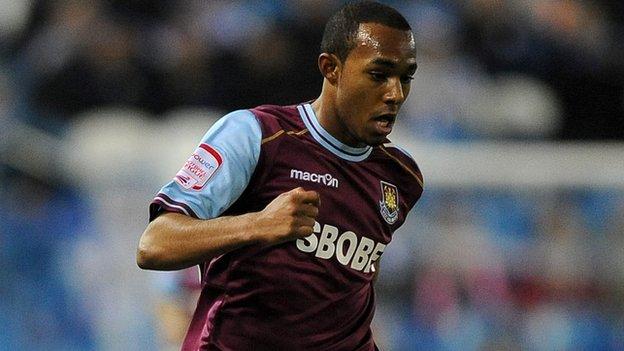 The England Under-19 international has signed an initial 50-day deal keeping him at St Andrew's until 12 January, with an option to extend the deal.

"Rob is a very quick-footed attacker who has got great ability to go past defenders," said Blues boss Lee Clark.

I've got to thank Sam Allardyce for allowing this one to happen. I didn't think he'd allow Rob to come

"He creates great opportunities for himself and others. He's also got a great strike of the ball.

"It was quite a coup getting Rob because he's been doing really well in the development squad at West Ham which has got him on the bench for most of the season in the Premier League.

"I've got to thank Sam Allardyce for allowing this one to happen.

"In all honesty, I didn't think he'd allow Rob to come as he's been a big part of their squad."

Hall, who has made seven first-team appearances for the Hammers, was part of the England side which won the Under-17 European Championship in 2010.

The teenager scored six goals in 10 games during his first loan spell at Oxford last season but failed to net in another four-game stint or in two matches for the Dons.

Blues are currently 19th in the Championship table, seven points clear of the relegation places.

Although they have won only one of their last six home games, Clark's men are on a run of three away games without defeat ahead of Saturday's televised trip to Derby, when Hall will be expected to make his debut.