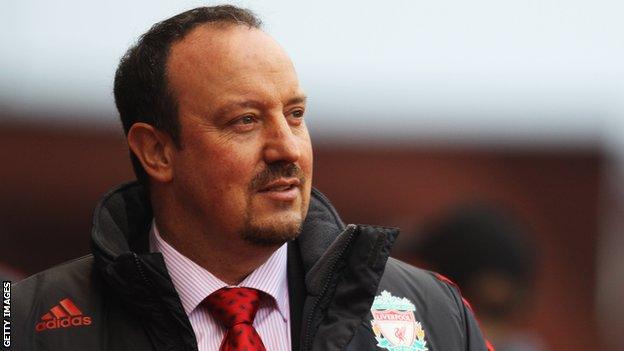 Benitez, 52, becomes Chelsea's ninth manager since the Russian became owner in 2003 on a deal initially to the end of the season.

The decision was made to replace Di Matteo following Tuesday night's 3-0 defeat by Juventus that left the club on the verge of exiting the Champions League.

Here are links to all BBC Sport's coverage of Di Matteo's sacking and Benitez's appointment.

Buoyed by a Champions League and FA Cup double in the previous season, Di Matteo's side raced to the top of the Premier League table following a run of seven wins from the first eight games.

"Chelsea showed, even at this very early stage of the season, they must be taken very seriously as title contenders," wrote BBC Sport chief football writer Phil McNulty.

However a controversial 3-2 defeat by Manchester United on 28 October halted their progress before both United and champions Manchester City moved ahead of the Blues in the table following Chelsea's 1-1 draws against Swansea and Liverpool.

A 2-1 defeat at the Italian's former club West Bromwich Albion increased the pressure further before the crucial Champions League fixture in Turin.

Speaking before the game in Turin, Di Matteo refused to consider what impact an early exit from the competition could have on his future.

While the Italian was reluctant to talk about what a loss would mean for his job security, the issue was moved to the fore after his side was comprehensively defeated and left on the brink of becoming the first holders to be eliminated in the group stage.

In the aftermath of the game, BBC Sport's Ben Smith considered the cost of a performance that was "a pale imitation of the displays Di Matteo inspired from his players en route to a famous victory in Munich last May".

After raising further doubts about his prospects by waiting an hour to appear for his post-match media duties at Juventus Stadium, Di Matteo accepted that the run of bad form would lead to questions about his position.

The Italian did not have to wait long to learn his fate, and the following morning

Speaking to BBC Sport, former Chelsea player Paul Elliott said he understood the reasons behind the sacking as the domestic and European results "had not lived up to the owners's standards".

A contrasting view came from BBC Sports editor David Bond, who queried the actions of an owner who seemed "harder and harder to satisfy".

Benitez was quickly installed as favourite to take up the manager's post at Stamford Bridge and, by Wednesday evening, the Spaniard had been announced as interim boss until the end of the season.

Rafael Benitez must not only satisfy the demands of an owner who seems beyond satisfaction after taking over as Chelsea manager, he must also uncover a way to win over a sceptical fanbase.

He remains a peculiarly divisive personality among the football community - for every Liverpool fan who did not argue with his sacking there are plenty more who would have happily welcomed him back at any point since.

The Russian's choice was given a vote of confidence by Dietmar Hamann, a player with whom the 52-year-old won the Champions League while at Liverpool in 2005.

The challenge awaiting the Spaniard was set out by BBC Sport's chief football writer Phil McNulty. "To suggest that Benitez's arrival to succeed Roberto Di Matteo has not been received with universal acclaim by Chelsea's supporters is a masterpiece of understatement," he wrote.

While Hamann was effusive about his ex-boss, the Chelsea Supporters' Group greeted the news with dismay.

Benitez insisted he would who were unhappy with his appointment.

He also insisted it would be after his previous troubles at Liverpool.