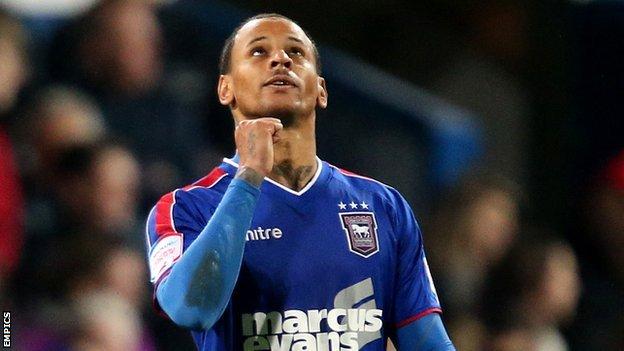 QPR striker DJ Campbell would be unwilling to extend his loan at Ipswich Town beyond January, but would be open to a permanent move to Portman Road.

The 31-year-old has four goals in eight games since

"I wouldn't extend the loan. But I would look at a permanent move," he told BBC Radio Suffolk.

DJ Campbell has started all eight games for Ipswich since joining in October.

They have lost six and won two of those, with both victories coming since Mick McCarthy replaced Pau Jewell as manager.

He has scored in both of those victories - a 1-0 win at Birmingham City and a 2-1 triumph over Burnley.

That run also includes 5-0 and 6-0 thrashings by Crystal Palace and Leicester City respectively.

"It's definitely something I would look at in January. We'll see what happens. I haven't quite made my mind up over what I want to do yet."

It remains to be seen whether Ipswich boss Mick McCarthy will want to keep the former Blackpool and Birmingham front man.

But Campbell, Ipswich's top scorer, has put in a string of impressive performances for a side that is in the Championship relegation zone and has won just two of their last 16 games.

"I've always stuck by my choice to come here," he said.

"The players I spoke to who used to play here gave a good account of the club.

"My decision to come here was spot on. We'll look at things in January and see what happens regarding Ipswich and QPR."

Campbell added: "I've loved my time here. The fans have been good to me. We've got a great bunch of players and a great gaffer.

"Him and Terry Connor [assistant manager] have been great since they've come."