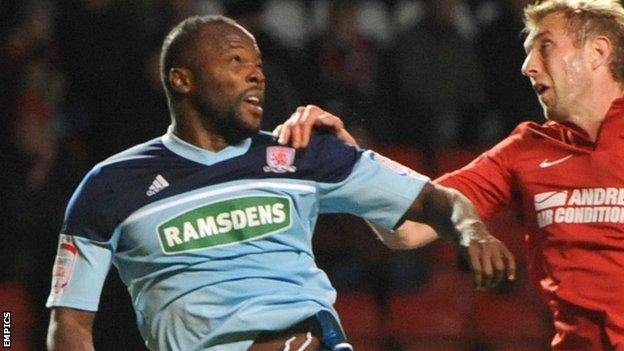 Defender Andre Bikey has said the Middlesbrough squad have to manage preparations carefully with three Championship games in seven days.

The Teessiders face Bristol City and Huddersfield at home on Saturday and Tuesday, before travelling to Birmingham City the following Friday.

"It's hard, three games in seven games but that's why we work hard on discipline," Bikey told BBC Tees.

"We have to manage our bodies, because we need it for these games."

He added: "To play, train, then play again a few days later, we have to look after ourselves, drink lots of water and be careful.

Andre Bikey has missed just one of 15 Middlesbrough games since signing for the Teessiders in September.

"If we don't there will be big trouble with the squad."

Bikey, 27, joined Boro after a spell out of contract in September, and has established himself within Tony Mowbray's back four.

Former England player Jonathan Woodgate and Seb Hines are two of the players to have partnered the Cameroon international this season.

Woodgate, 32, has been nurtured through much of the campaign so far with niggling calf and hamstring injuries, and Hines, 24, has proved an able deputy when called upon.

"Woody is a good player, experienced, I'm happy to play in the side with him and we make a really good pair and he manages everything with his experience," Bikey added.

"Seb has less experience but is sharper, stronger and more hungry.