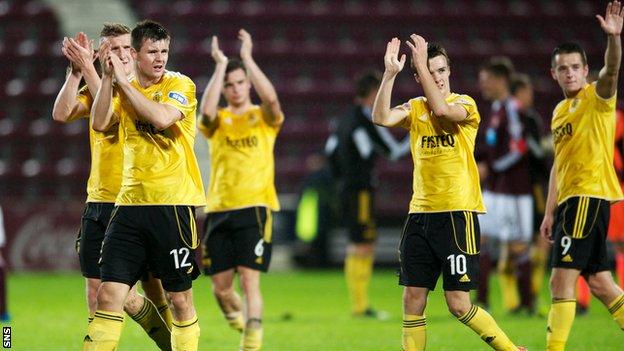 Gareth Evans and Richie Burke will be Livingston's management team for the "foreseeable future".

The club's chief executive, Ged Nixon, said there will not be any external appointments for the time being.

"They [Evans and Burke] have assumed day-to-day matters and we're not looking to bring in anyone else at this stage," Nixon told BBC Scotland.

"We've told everyone who applied that's the way it stands for the foreseeable future."

Evans and Burke were both part of John Hughes' backroom staff before he departed Livingston to manage Hartlepool United.

Evans made over 200 appearances for Hibernian in the eighties and nineties and has also had coaching roles at Easter Road.

"There's been a massive emphasis on bringing youth through recently and we value the continuity offered by Gareth [Evans], Richie [Burke] and Neil Hastings," said Nixon.

"We don't want to run the risk of damaging the status quo."