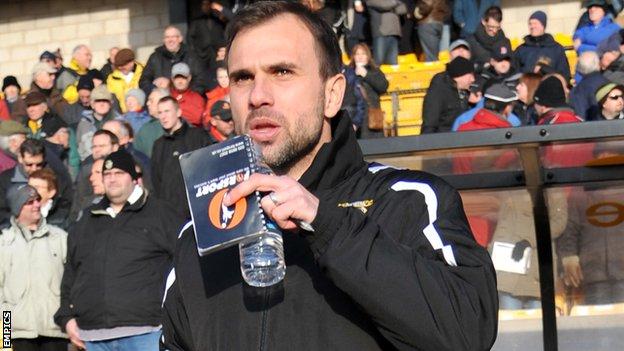 Plymouth Argyle manager Carl Fletcher has called on the club's supporters to show patience with his side.

The Pilgrims, who face Chesterfield on Saturday, have not won in seven matches and are just two points off the League Two relegation zone.

"Be patient with the players and get behind them," Fletcher told BBC Radio Devon.

"At the end of the day the lads go out there to work hard and try and do the right thing and get good results."

And despite the poor run, which has seen the Pilgrims Fletcher does not feel that he is under any more pressure than earlier in the season.

"I could do with a win," he said. "The lads, for their efforts and hard work they're putting in, deserve that.

"There's no pressure, you've got people going off to war and people fighting and people with illnesses, that's pressure, this is just a game of football.

"Whatever you do in life, the first time that it gets a little bit difficult what do you? Just give up? That's just a waste of time.

"You keep putting the work in. There's no point in me saying we're going to work harder now because that means we weren't working hard beforehand.

"We'll be working hard, as we always do, to try and get good results and get goof performances."

And Fletcher says his side have not played too badly in the past few games, but have come up against a number of in-form sides.

"Performances have been decent lately, we just maybe haven't got the rewards for the performances in the games we've played," he said.

"The last six league games we've probably had four away from home and five are expected to be in the play-offs at a minimum.

"We've had a tough run recently and we've held our own pretty much in all of the games."