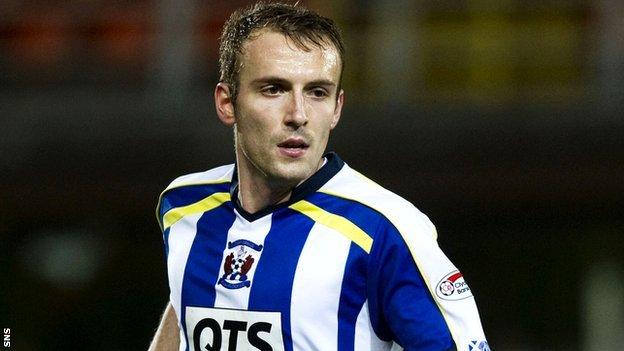 Kilmarnock's Liam Kelly could be sidelined for three months after picking up a shoulder injury.

Kelly, who won a first Scotland cap in the friendly against Luxembourg, will have a scan on the injury on Thursday.

Kilmarnock manager Kenny Shiels said the midfielder had sustained the injury while training.

"If he has torn the ligament or ruptured them, it could be three months, but it could be six weeks," said the Rugby Park boss.

"We are hoping to find out in the next 48 hours.

"There is some ligament damage to his shoulder after falling on the training ground in an accident.

"We have just got Paul Heffernan, Cammy Bell and James Fowler back and now we have lost Liam, which is a bit of a blow."

Kelly signed for Kilmarnock in 2009, making his debut against Hamilton the following year.

However, Kelly's father tragically died of a suspected heart attack shortly after the full-time whistle.