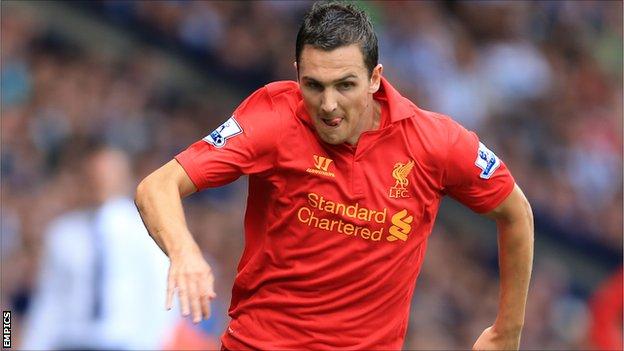 Middlesbrough manager Tony Mowbray has said it would be "wrong" to talk about reports linking his side with a move for Liverpool's Stewart Downing.

Downing, 28, has made only one Premier League start since Brendan Rodgers's appointment in June, in contrast to 28 under Kenny Dalglish last term.

It would be wrong for me to talk about a player at another club. If I was Brendan Rodgers I wouldn't want Tony Mowbray to be talking about one of my players

The England winger left the Riverside for Aston Villa in July 2009, before moving to Anfield two years later.

"I have to say it's just a rumour," Mowbray told BBC Tees.

"It would be wrong for me to talk about a player at another club. If I was Brendan Rodgers I wouldn't want Tony Mowbray to be talking about one of my players.

"Stewart is a Middlesbrough lad which is why it has created an interest, he started his career here.

"But yet he moved for £20m and the salary and everything that goes with it, it's not something to discuss at the moment."

One player likely to return to the Riverside, albeit in different circumstances is Matthew Bates, whose new club Bristol City are visitors on Saturday.

"We know his qualities and what he can produce but it was one of those scenarios he found himself in where he was getting himself fit but I had to move on in central defence to bring players in to do a job.

"Those players are doing a decent job and the decision was made between us for Matthew to move on, but we're pleased he found a club and is playing again.

"After Saturday of course, we wish him well."