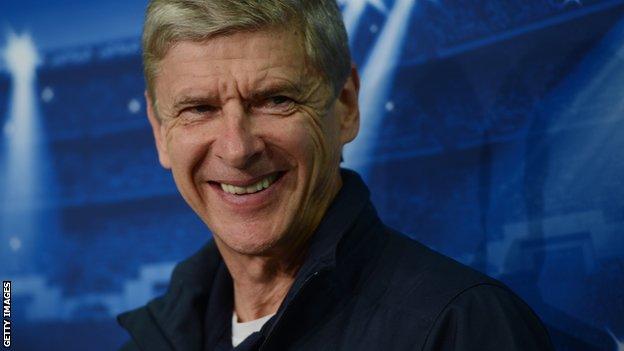 The Gunners secured their last-16 spot with a 2-0 win over Montpellier at home on Wednesday.

Only Real Madrid's 16 successive seasons in the knockout stages can better the Gunners' European run.

"It is a massive satisfaction. I am at times with my back to the wall, accused of not spending fortunes," he said.

"If you look at how many teams have done that in Europe, you will find very few and that shows it is not easy."

Arsenal have failed to win a trophy in seven years with Wenger being criticised for failing to spend big amounts to end the drought.

Last summer Wenger brought in Santi Cazorla, Olivier Giroud and Lukas Podolski for a combined fee of around £40m.

However, Arsenal also allowed Robin van Persie to join Manchester United for £24m and Alex Song leave for Barcelona in a £15m deal.

"It is important as well to show that we can do it, with the way we do it, that is with the club in a good financial situation and with the players coming from our youth development," Wenger continued.

This was Arsenal's first home Champions League win against a French side. Their four previous matches ended in two defeats and two draws

"I think there are many different ways to be successful and I am glad our way is one of them."

Arsenal face a trip to Premier League strugglers Aston Villa on Saturday and Wenger has called for some domestic consistency from his side.

The Gunners boss does not believe a title challenge is beyond them despite being nine points off leaders Manchester City.

"It looks like the team who is showing consistency has a chance," he said.

"If we can show consistency now then we have a chance of coming back to the top teams.

"We had a difficult period I hope now we can come back and show the consistency needed."

Wenger has also called on Theo Walcott to make a concrete commitment to the club soon.

The Gunners winger is out of contract in the summer and negotiations have stalled over a new deal.

"It is important for our squad as well that he is completely committed. I do not doubt it, but as well at some stage it has to be concrete," Wenger added.