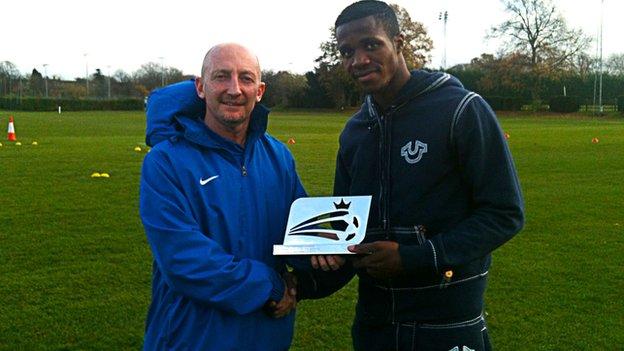 The 20-year-old, who made his England debut in the recent friendly against Sweden, scored four goals in as many games in October.

"I'm delighted and honoured to get the trophy," said Zaha.

His manager Ian Holloway added: "He's a joy to watch, to be with and to work with. He is getting a really fantastic high level of consistency."

Palace are currently top of the Championship and Zaha has featured in 16 of their 17 league games this season.

The winger scored twice in the 2-1 win at Wolves on 2 October and again in the 4-3 defeat of Burnley four days later.

His form during the month contributed to him becoming the first Championship outfield player to be called up by England since Jay Bothroyd in 2010.

"A couple of the games we had were really tough but we had to keep going and I'm glad I managed to pop up with a couple of goals," added Zaha of his form in October.

"I'm pleased with my goals because I had a drought for a while so it felt good to get on the scoresheet."

"It was also a great moment for me to be [with England] with all the top players. It was great to be with them and a great experience for me," said Zaha, who made his Palace debut in March 2010 and has played for England at under-19 and under-21 levels.

Holloway was in charge of Championship rivals Blackpool during October, before leaving to take over at Palace on 3 November.

And in his three weeks at the club he has been very impressed with Zaha.

"I'm very proud of him and so is everyone at Palace."

Zaha has been at the club since the age of 12 and is the latest home-grown talent to make the breakthrough following the likes of Victor Moses and Nathaniel Clyne.

David Wetherall, head of youth development at the Football League, said, "Wilfried is a young and exciting player who has certainly captured people's attention over the past couple of years, especially this season.

"At the age of 20 his skill and eye for goal is beyond his years and he is certainly one to watch for the future, I wish him all the best of luck for the rest of the season and beyond."