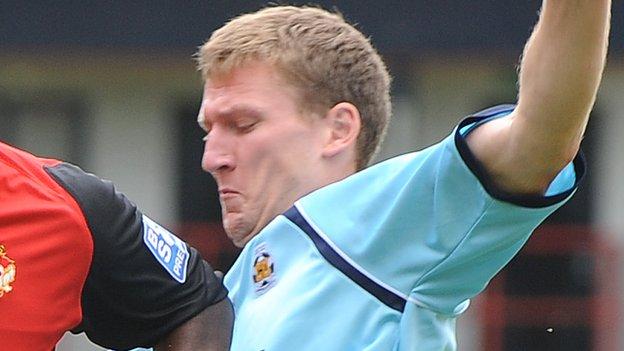 Wylde, 25, who began his career at Cheltenham, spent a month on loan at Kidderminster Harriers before joining Tamworth in 2008.

He was made captain after signing for Cambridge in the summer of 2011 but he has since been hampered by injuries, making just 31 starts in 18 months.

Wylde will replace Liam Chilvers, who has rejoined Port Vale on loan.

It is the classic chicken and egg situation: Michael needs games to improve his match fitness but we can't give him that opportunity because he is not match fit

"This has been a very difficult season for him, having missed the whole of pre-season training.

"On two occasions we have tried to get Michael into the team to gain match fitness by playing, but it is evident that in our current situation we need to get him these minutes elsewhere.

"With Michael not in the team at present, it is the classic chicken and egg situation: Michael needs games to improve his match fitness but we can't give him that opportunity because he is not match fit.

"Therefore, this move is good for the club but most importantly, good for Michael Wylde."

Wylde is expected to make his debut in Saturday's FA Trophy third qualifying round tie at home to Nuneaton (24 November, 15:00 GMT).

This is the third time the two sides have been paired together in knockout competitions in a year.

Telford knocked Nuneaton out of the Trophy at the first round stage last December, but Boro then got their revenge in this season's FA Cup, beating the Bucks after a replay.