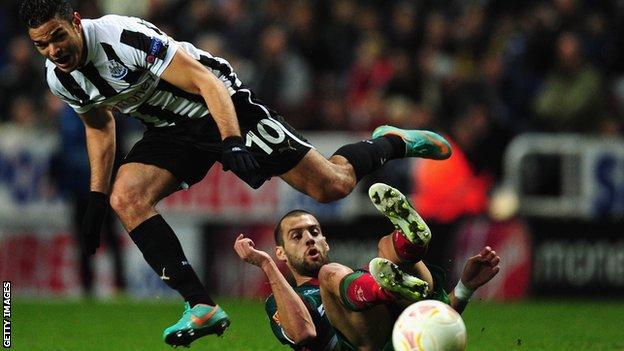 The Newcastle manager takes his team to Southampton on Sunday with 10 players injured and Fabricio Coloccini banned.

Ben Arfa picked up a hamstring problem and Cisse a thigh injury as the Magpies reached the last 32 of the competition against their Portuguese opponents.

"We are getting blow after blow at the moment," said Pardew.

"We will have to wait and see about Papiss but Hatem will be missing on Sunday. I don't know how long he will be out.

"Papiss got a kick on the thigh. We thought he might stiffen up over half time and he did. He possibly has a chance for Sunday."

The Magpies had been leading through Sylvain Marveaux's first goal for the club when the duo left the fray either side of half-time.

Maritimo substitute Fidelis equalised with 11 minutes left by shooting low past Tim Krul but the draw was enough to secure a spot in the knock-out stages in front of a low crowd of 21,632.

Pardew added: "When you get two very good players, who affect the game, coming off the pitch it gives the other team a lift and we didn't have the options to add some attacking flair or get down the sides.

"But we needed to get a result tonight and we got that and now we are through.

"They had nothing to lose, so they came on to us, and that was a little bit disappointing, that period.

"But I am delighted we are through. It's very important for us, for our feeling because up until that last 20 minutes, we have been excellent in this tournament, so I am not going to get carried away by that.

"We know that we are really stretched at the minute, and I thought that showed in that period."