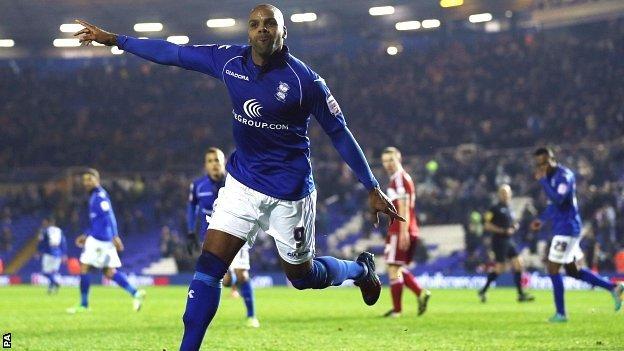 Birmingham City bounced back from the pain of last week's successive 3-2 defeats to win their own St Andrew's Day five-goal thriller.

Marlon King hit the winner, his second of the night, in the 81st minute, as Lee Clark's men twice came from behind to beat high-flying Middlesbrough.

Scott McDonald fired 'Boro back in front, but Wade Elliott volleyed home before King raced clear to win it.

Victory would have moved Tony Mowbray's side up to second, but their chance to close the gap on Cardiff and Crystal Palace in first and second evaporated as the hosts finished the stronger of the two sides.

It took 14 minutes to trigger the first noteworthy moment of the game - 'Boro's opening goal.

From Halliday's left-wing cross, Leadbitter timed his near-post run to perfection and powered goalwards a bullet header which Jack Butland got his right arm to it but could not keep out.

'Boro were close to doubling their lead when, from Justin Hoyte's right-wing cross, Lukas Jutkiewicz scorched another header just over.

And the visitors also had a strong penalty shout for Pablo Ibanez's clumsy trip on Scott McDonald.

But the Blues went close themselves when Nikola Zigic set up King in space on the left edge of the 'Boro box.

Keeper Jason Steele touched his carefully-placed right-foot shot onto the outside of his left post, Blues being doubly punished when referee Roger East awarded a goal-kick. But the home side's luck was in on the stroke of half-time when they won a penalty.

King fell to earth after making contact with Bikey's thigh and, from the resulting spotkick, the Blues' top scorer struck his fifth successful penalty of the season.

'Boro were back in front on 62 minutes when Seb Hines' headed flick-on caused such confusion between the stricken Ibanez and the stranded Butland that McDonald was able to nip in and fire his eighth goal of the campaign.

Elliott's dipping effort was well-struck enough, but it was within reach of Steele, who would have been disappointed to have conceded it.

Steele redeemed himself by then parrying Jonathan Spector's fierce left-foot shot for a corner.

But Blues top scorer King won the three points when he drilled his low right-foot shot just inside Steele's right post for his 13th goal of the campaign.

And, while it was a second successive away defeat for 'Boro, for Blues, victory made it four points out of a possible six.