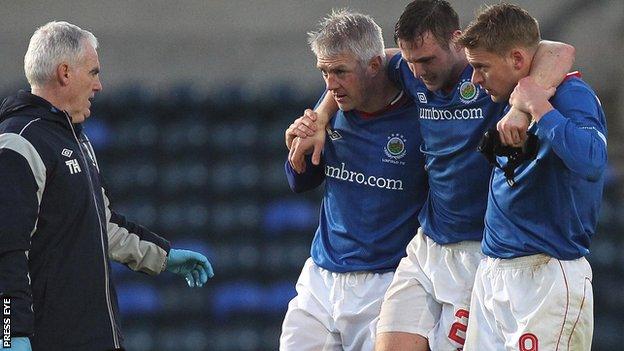 The influential midfielder limped out of last weekend's 1-1 draw at home to Glenavon with an ankle problem.

The champions are still without the injured Ryan Henderson and Niall Quinn while striker Mark McAllister remains sidelined with a suspension.

Saturday's game against Ballymena comes three days before the sides meet again in the final of the County Antrim Shield.

Linfield recently beat United 6-0 in the League Cup and last week the Sky Blues were humbled 8-0 by leaders Cliftonville.

"Those defeats were wake-up calls for us. Up to that point, things had been going OK," said Ballymena manager Glenn Ferguson.

"With leaders Cliftonville having a Saturday off, their manager Tommy Breslin will be alongside Joel Taggart in the Windsor Park commentary box. They will see how Ballymena recover from the 8-0 hammering Tommy's team inflicted on them last weekend. It is the month's second warm-up for Tuesday's County Antrim Shield final with Linfield - just don't mention the first to fans of the Sky Blues!

At the Coleraine Showgrounds, Liam Beckett and Grant Cameron will find out if the home side can break a run of four consecutive 1-1 draws when they face Glentoran. The signs aren't good because the last five league games between the sides have ended level."

"We have had a few injuries and need to strengthen our squad and we will look to do that in January.

"The aim is to secure a top-six finish."

With the Cliftonville not playing until Monday night, second-placed Crusaders will be aiming to close the gap at the top of the table by winning away to Donegal Celtic.

The Crues have lost five of their eight away league games this season but will be expected to see off DC who have won just one Premiership game.

Manager Stephen Baxter hopes to have a full-strength squad to chose from - his only doubt is midfielder Declan Caddell who will have a pre-match fitness test because of a hamstring concern.

"Our league defeats have been on the road but, having said that, we are in a rich vein of form," said Baxter.

"We are playing well and have to approach the match with confidence."

Coleraine take on Glentoran hoping to improve on their recent run which has seen them take just one win from their last seven Premiership fixtures.

The Bannsiders, second in the table a month ago, are in fourth place - eight points behind Cliftonville.

Fifth-placed Glentoran, just a point behind Coleraine, had a poor run in October but should be buoyed after winning recent games against lowly Donegal Celtic and Lisburn Distillery,

Third-placed Ballinamallard, with just one win in five, go to Mourneview Park hoping to complete a league double over Glenavon.

Meanwhile, Portadown will look to continue their fine recent record at home by beating Dungannon Swifts at Shamrock Park.