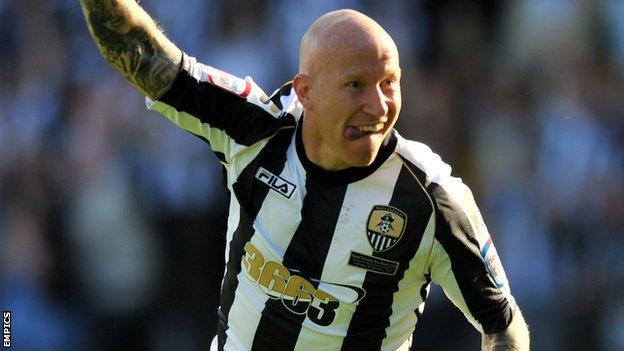 Promotion-chasing Port Vale have missed out on the loan deadline signing of Notts County striker Lee Hughes as the paperwork was not completed in time.

Notts chief executive Jim Rodwell told the club's official website that a proposed loan deal for the 36-year-old had been discussed.

"However, as it was so late in the day, the paperwork did not go through in time," he said.

Hughes has started just two games for Keith Curle's side since the start of September, the most recent of them at Scunthorpe last Saturday when he got both goals in a 2-2 draw.

But he was involved in an off-the-ball incident against the Iron, which this week saw him charged by the Football Association.

And he has been issued with a three-game ban, which will see him miss Notts' League One games at home to Swindon and at Yeovil, as well as next weekend's FA Cup second round trip to Rotherham.

But, although Hughes now looks a likely January window target, Adams had to settle only for the return to Vale Park of defender Liam Chilvers from non-league Telford.