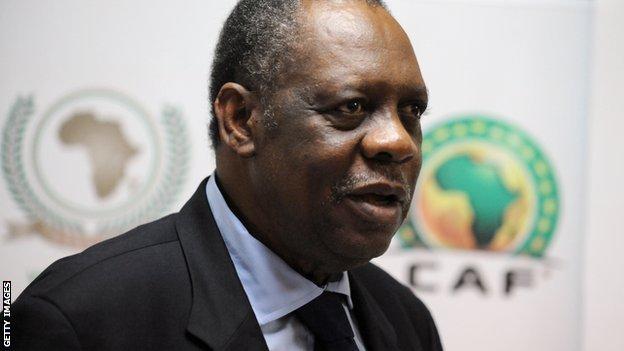 The Council for East and Central African Football Associations (Cecafa) has unanimously decided to support Issa Hayatou in his bid to serve another term as president of the Confederation of African Football (Caf).

The elections will take place next March in Morocco.

The decision was taken at the Cecafa congress in Uganda on Friday with the body giving Hayatou its backing because of his record so far, particularly in the area of football development.

"We have decided to support Hayatou again come the elections because we think he needs another term to consolidate and finish some of the things he needs to accomplish," said Sam Nyamweya president of Football Kenya Federation.

He added that Hayatou has helped bring the World Cup to Africa for the first time, got several sponsors for football and also introduced the CHAN tournament, which helps to develop home-based players.

Cecafa members with a Caf vote

Hayatou, together with some of his Caf members, attended the Congress.

They will also attend the opening ceremony of the Cecafa Tusker Senior Challenge Cup on Saturday when Ethiopia face South Sudan in the first match before hosts and defending champions Uganda take on Kenya.

The secretary general of the Somalia Football Federation, Abdi Qani Said Arab, also told BBC Sport that it was good for Cecafa to support Hayatou because he has achieved a lot for the continent - and he is so far the sole candidate.

Caf recently adopted controversial new rules that will bar anyone outside the executive committee from contesting the organisation's presidency.

It means that Jacques Anouma, one of Africa's representatives on the executive committee of world governing body Fifa, and South Africa's 2010 World Cup chief Danny Jordaan are ineligible to run for the continent's top football job.

The controversial amendment states that anyone seeking the presidency must be a voting member of the executive committee.

The Cecafa members who have votes are Uganda, Kenya, Tanzania, Rwanda, Burundi, Djibouti, Sudan, South Sudan, Ethiopia, Somalia and Eritrea. Zanzibar is the other Cecafa member but does not get a vote because it is not a member of Caf or Fifa.

Hayatou has been the president of Caf since in 1987. In 2002, he ran for president of Fifa but was defeated by current president Sepp Blatter.

Friday's Cecafa Congress also decided that Kenya, who has been due to host this year's tournament, will organise the 2013 Cecafa Senior Challenge Cup.

Nyamweya said they the Kenya FA is happy to be given the chance and it is hopeful it will get sponsor, but he also revealed that a contingency plan is in place.

"We have been given first priority and in case we fail, then Rwanda will take up the hosting," he said.