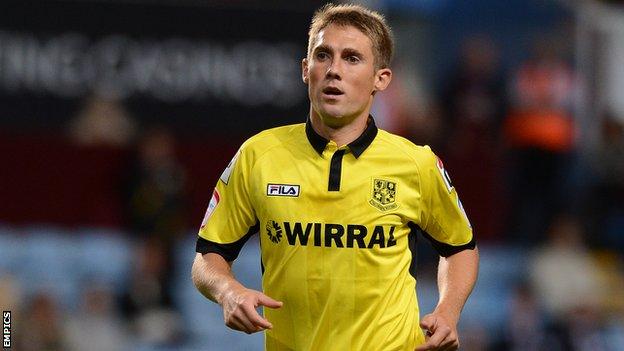 Danny Harrison has no complaints about being left out of the Tranmere Rovers team for so long after the club's excellent start in League One.

Harrison, 30, but had to wait until Tuesday's 0-0 draw with Walsall to make his first league start of the campaign.

James Wallace and Liam Palmer have been the preferred pairing in midfield.

"Because they've been doing well, there's not been much I can do about it," he told BBC Radio Merseyside.

"I've been to see the gaffer [Ronnie Moore] and asked him to get me involved, but with the best will in the world, when the team are doing that well, you just have to sit it out and wait for your chance.

Danny Harrison came through the youth system at Tranmere and played 147 times during his first spell at Prenton Park, which ended in 2007

"I've been involved in the last four or five games, so I'm happy with the way things are going."

Rovers remain two points clear at the top of the table, despite from home matches against MK Dons and the Saddlers.

Moore was able to bring in ahead of the loan deadline to ease Tranmere's injury crisis.

And Harrison believes a strong bond within the squad will help the team get through a difficult spell of fixtures,

"This is one of the best groups I've been involved in," he said.

"It helps with the nucleus of the squad being homegrown. There's a lot of lads that have come through together and there are other local lads like Wallace, Andy Robinson and myself. We're all from this area and that's a big help for team spirit."