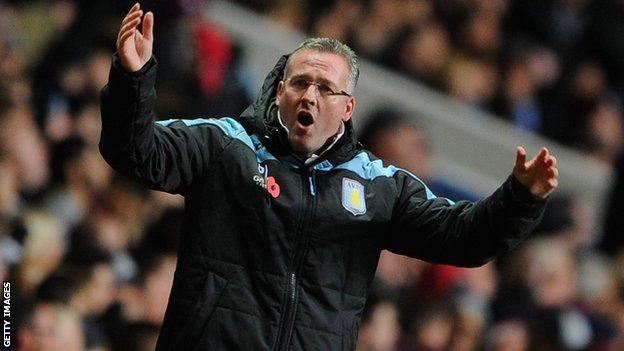 Paul Lambert has repeated his disgust about the "shocking decision" Aston Villa received against Manchester City despite being given a one-game ban.

Villa boss Lambert was angered by the penalty Andreas Weimann conceded for handball that led to City going 2-0 up.

"I still stick by the decision," the Scottish manager said. "It annoyed me."

He was also given an £8,000 fine after he admitted a Football Association charge for comments made after the eventual 5-0 defeat last Saturday.

The incident that incensed Lambert came when referee Jon Moss pointed to the spot after his assistant Adrian Holmes spotted an offence by the Austrian striker, but replays showed no contact had been made with the ball and none of City's players appealed for a spot-kick.

He will now have to watch from the stands when his side take on Arsenal at Villa Park on Saturday.

"You can't change it," Lambert continued. "But if you're only about 40 yards away, how can you not see it. Nobody claimed for it.

"It might not have changed the result or whatever but it certainly changed the pattern of the game because we were well in it.

"The aftermath happens and then you end up getting done for it."

Lambert also rejected reports that he had fallen out with £24m club record buy Darren Bent as he prepared to welcome back the striker following a three-match absence with an ankle injury.

He said. "Darren has been fine around the place and there has never been a problem anyway."