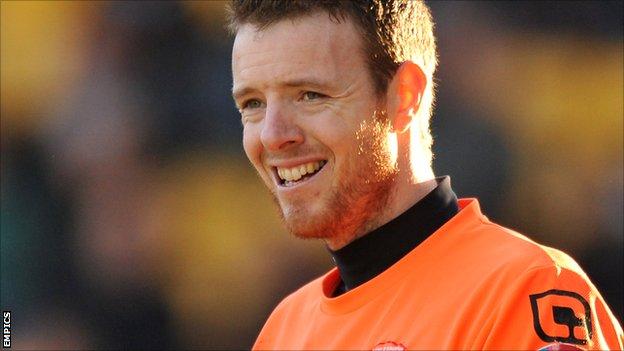 Carlisle United goalkeeper Adam Collin has said the dressing room spirit has been unaffected by a run of five League One games without a win.

The Cumbrians have taken one point from a possible 15 during that streak, despite reaching the FA Cup second round with victory against Ebbsfleet.

"We've had a bad run but it happens to a lot of teams and we're confident we can turn it round."

Three defeats in a row, including two on home turf, have at Brunton Park, with United dropping to 19th in the table - two points above the relegation zone.

"I've not heard a bad word against anyone in the dressing room," Collin added.

"We come into training well everyday. We're in this together, and we can turn it round.

"It's not good enough. It is hard to put the finger on why, but we defend as a team, we attack as a team so it's a team thing."

Abbott's options have been affected by the long-term absences of key players such as Lee Miller and Rory Loy, as well as short-term injuries to captain Paul Thirlwell and defender Peter Murphy.

"We know how big a miss Lee Miller is, and when you take that experience out of the team it's going to hurt," he said.

"They're a big miss but some of the young lads have come in and done exceptionally well.

"When they come back in I'm sure we'll turn things around."