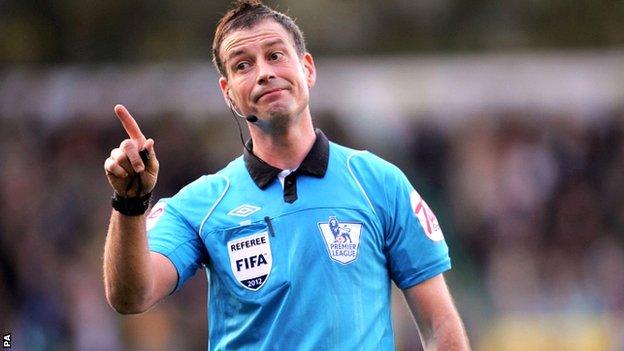 Referee Mark Clattenburg will return to action on Sunday after being cleared of using inappropriate language,

He has not officiated since Chelsea claimed he directed racial language at John Mikel Obi in their loss to Manchester United on 28 October.

The 37-year-old was cleared on Thursday following a Football Association review and will now be the fourth official for Tottenham's home game with West Ham.

His first match in charge will be on Wednesday as Southampton play Norwich.

Having missed a fourth round of Premier League matches as the investigation continued, Clattenburg was finally absolved of any blame when the FA concluded he had "no case to answer".

The head of referees' union Prospect, Alan Leighton, called for "a full and unreserved apology and compensation for loss of earnings, damage to reputation and stress".

Chelsea released a statement when the decision was announced which said: "The club accepts the case is now concluded and notes the FA states the allegation was made in good faith."

In a statement on Thursday Clattenburg said: "To know you were innocent of something but that there was the opportunity for it to wreck your career was truly frightening."