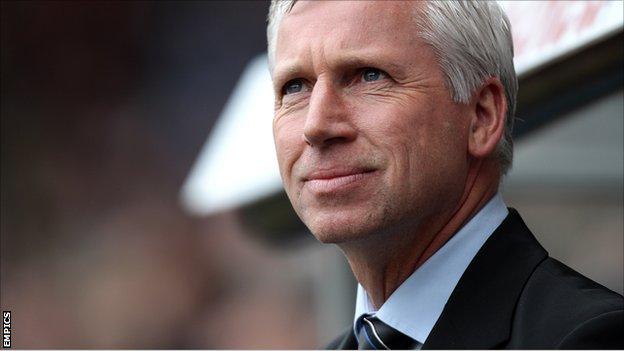 Pardew was sacked by chairman Nicola Cortese weeks into a second season at St Mary's, having led Saints to a Wembley success in his first campaign.

"Me and the chairman didn't see eye to eye," Pardew told BBC Newcastle.

"I was fortunate to get this position [at Newcastle], but did think I had been harshly treated."

He added: "To lose a job from a League One club is difficult."

"I felt I could take the club out of the division, minus 10 points and I didn't have a starting 11 when I arrived," Pardew said.

"I took Rickie Lambert who I thought could play in the Premier League and he's proved me right - I'm pleased for him because he's a terrific lad.

"Four or five of those players I had in that division are now playing in the Premier League, so there's a lot of work there that I'm pleased about."

Pardew took over a Southampton side docked 10 points for entering administration and relegated to the third tier of English football.

The 51-year-old was unable to bring Saints back to the Championship under the circumstances but laid foundations that eventually led to a Premier League return under current manager Nigel Adkins in May.

Adkins insisted he did not need to thank Pardew for any the success he has enjoyed at Southampton though.

"I don't think I owe him any debt of gratitude at all," Adkins said.

"Whatever situation arose, he moved on. I am the manager of Southampton Football Club. We've just had back-to-back promotions, we're doing ever so well in our forward progression.

"We're trying to make sure the youngsters come through the system here at Southampton. To have James Ward-Prowse, Ben Reeves and now Luke Shaw into the first-team is very rewarding."

Saints have found the step up to the Premier League difficult, with eight defeats in 12 games, but last weekend's 3-1 victory at QPR ended a six-match run without a win.

"You can't take a team that won the Championship and think they'll survive in the Premier League," Pardew said. "You need additions. They have spent money on the squad, more money than us.

"I think they have improved enough to make it [in the Premier League]. They've gone back to what they're good at, with [Rickie] Lambert the focus and Adam Lallana."

And Adkins is positive about his relationship with chairman Cortese, who has previously denied any rift between himself and Pardew.

"Nicola Cortese has been very supportive of me in my time here," Adkins told BBC Radio Solent. "I'm sure Alan Pardew will get a good reception."

Cortese's arrival at St Mary's came when he assisted Liebherr in his takeover of the club in July 2009 and the Italian's time at chairman has coincided with on-the-field success for Saints.

"The big thing is, you talk about the bad times. Markus Liebherr and Nicola Cortese took the club out of administration and they've led it forward and done it from the front," Adkins added.