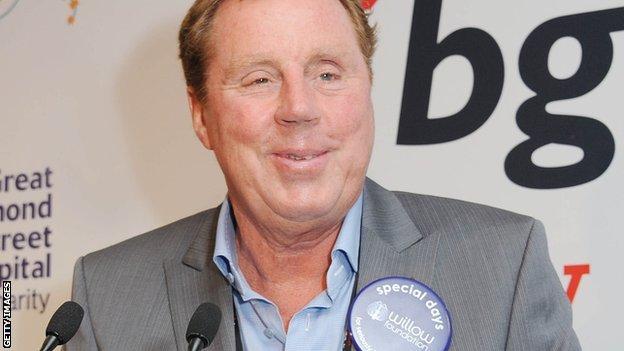 The 65-year-old will watch his new team from the stands when at Old Trafford in the Premier League on Saturday.

Redknapp told QPR's website: "This was too good an opportunity to turn down.

"I'm delighted to be back in the managerial hot-seat at QPR. I can't wait to get to work and get the results necessary to kick-start our season."

Redknapp, who has been out of management for five months after being dismissed from his role at Tottenham in June, succeeds Mark Hughes, who was sacked on Friday with QPR bottom of the Premier League table, and without a win in their opening 12 games.

"Harry was our number one target, the unanimous choice of the board and we're delighted we've been able to attract him to the club," said the Malaysian businessman.

"He has a proven track record in the Premier League and has all the characteristics we were looking for to get us out of the current situation we find ourselves in.

"His man-management skills are second to none and we have a manager with significant experience at the highest level of football, who can come in and immediately help deliver our objectives."

Redknapp's former assistant, Joe Jordan - one of the favourites for the Scotland national manager's job - to discuss a potential appointment.

Rangers are four points adrift of 19th place - the same position Tottenham were in when Redknapp took charge at White Hart Lane in October 2008.

Under his guidance, Spurs narrowly missed out on earning a spot in the Europa League with an eighth-place finish, before securing Champions League qualification in the following campaign.

Redknapp was installed as favourite to take over as England coach following Fabio Capello's resignation in February 2012, but was overlooked by the Football Association in favour of Roy Hodgson.

Speculation that he would take the national team role coincided with a slump in Spurs' form and Redknapp was dismissed by Tottenham in the summer after reportedly failing to agree new terms on his contract.

Redknapp kept a struggling Portsmouth in the Premier League during his his first spell at Fratton Park and repeated the feat on his return in December 2005, winning the 2008 FA Cup in his final campaign before leaving for Tottenham.

In between his reigns at Portsmouth, he was a controversial appointment at Pompey's south coast rivals Southampton.

Redknapp was unable to avoid relegation at the Saints, overseeing the end of their 27-year stay in the top division before resigning with the club unable to mount a challenge at the top of the Championship.