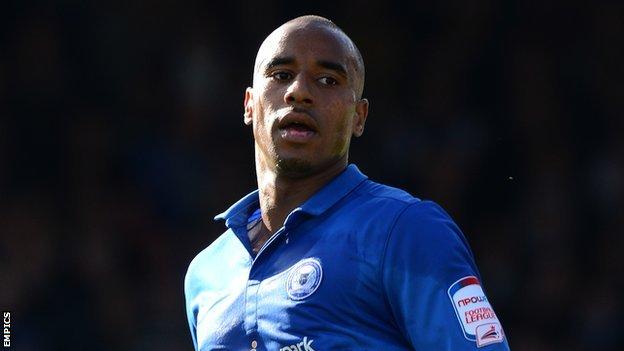 Ipswich Town boss Mick McCarthy has said he has no interest in the off-field incident which saw Tyrone Barnett transfer-listed by Peterborough United.

after being cautioned by police during a night out in the city centre.

"I don't know what happened and I'm not going to start finding out. I won't be delving too deeply into that one," McCarthy told BBC Radio Suffolk.

"There's a code of conduct at the club and the players know what it is.

Barnett switched to Peterborough from Crawley in a club-record £1m move in February and went on to score four goals in 13 games.

But he has netted just once in 10 this term and following his breach of the club's disciplinary code, Posh boss Darren Ferguson said the forward had played his last game for the club.

However, McCarthy believes he has brought in a striker capable of providing regular goals to help his side's fight against relegation.

"We're just taking him on loan and we'll see what happens," he said.

"I think if we get the right service to him he will score goals. He's impressed in training already this week.

"The scouting reports have all said if you can get him until January he will be excellent."

Ipswich host Posh on Saturday in match between two of the Championship's bottom three, but Barnett is unable to play as part of the loan agreement.