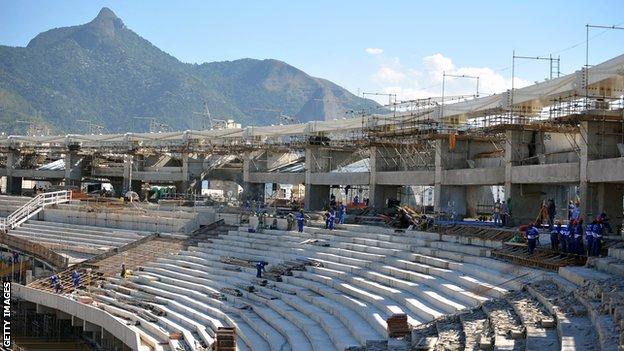 The fixture will take place on 2 June at the arena which will go on to host both the 2014 World Cup final and the opening and closing ceremonies of the Rio Olympic Games two years later.

The friendly will be Brazil's first game at the 78,000-capacity Maracana after substantial modernisation work.

Brazil first travel to Wembley for a friendly against England on 6 February.

The renovation work at the Rio stadium, expected to be completed by 28 February, will expand the roof to cover all of the stands.

News of the friendly at the spiritual home of Brazilian football was confirmed by the Governor of Rio de Janeiro, Sergio Cabral.

But the Football Association declined to comment on the information released by Mr Cabral.

The game in Rio will take place just two weeks before the start of the Confederations Cup on 15 June, a tournament which is seen as a warm-up for the World Cup a year later.

Back in 1950, an estimated crowd of 200,000 people packed into the old Maracana to see Brazil lose the World Cup final to Uruguay.

England last played there in 1984, when John Barnes's mazy dribble and goal helped England to a famous 2-0 victory.

A successor is expected to be announced in January.