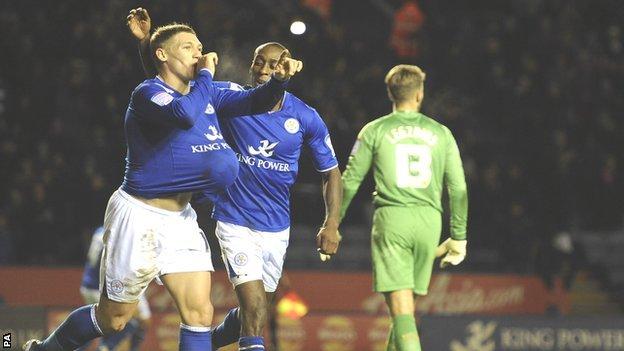 Substitute David Nugent scored a late double as Leicester City withheld a Derby County fightback to win a captivating East Midlands derby and move up to third in the Championship.

The Foxes stormed into a two-goal lead thanks to Zak Whitbread's header and a lovely finish by Martyn Waghorn and they had more chances to seal victory.

But Theo Robinson's powerful strike before the break gave the Rams hope.

And it was only two superb Nugent finishes that made the points safe.

But the emphatic 4-1 scoreline did not reflect a keenly fought match in which the visitors played a full part, despite looking like they would be blown away in the early stages.

Leicester dominated from the outset and led through Whitbread's header from Waghorn's corner.

The impressive Waghorn then hit the bar with an attempted cross from a wide free-kick before City grabbed a deserved second.

Anthony Knockaert won possession on the left and found Jamie Vardy, whose exquisite first-time pass was passed into the corner of the net by Waghorn.

However with the hosts threatening to run riot, an equally impressive move involving Will Hughes and Michael Jacobs saw the ball worked to Robinson, who took a quality first touch and smashed the ball past keeper Kasper Schmeichel.

Both sides had chances, with Rams keeper Adam Legzdins making several fine saves - including pushing a Waghorn effort onto the bar.

But Derby were unable to draw level and Nugent's late introduction was the deciding factor as the hosts eased to a victory which takes them to within two points of second-placed Cardiff City.

"It was an outstanding start to the game for us. I think that's the best we've played.

"We totally dominated and to get two goals in that period was fully deserved.

"I was a bit disappointed that we were only one goal ahead at half-time, but I think we kept our composure well in the second half."

"The first time Cardiff went in our box the other night they scored and it was the same with Leicester. It's another goal conceded from a set-play," said the boss.

"That's the only thing that's holding us back. The general performance was not too bad for long periods of the game, but all that goes out the window if you don't defend properly and we certainly didn't in the first half hour.

"If you give someone like Leicester the first goal after five minutes they're going to be all over you. They're extremely strong at home."