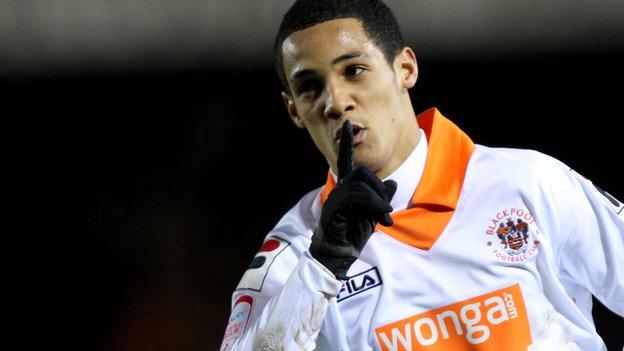 Blackpool boss Michael Appleton tasted his first win since as his side beat Peterborough.

Wes Thomas put the visitors in front in the second half when he converted a cross from Thomas Ince.

Ince scored a penalty after being fouled by Shaun Brisley, before Dwayne Gayle pounced on a poor backpass to pull one back for Posh.

But Blackpool secured the win after Nouha Dicko slid in to score and Ince scored from long range.

Ince, bought from Liverpool in August 2011, was the inspiration for his side's victory after four draws.

Peterborough have now lost six out of their least seven games and, after Blackpool had made the better start, the home side failed to take a gilt-edged chance.

George Boyd was clean through on goal, only for his left-footed strike to be saved by the feet of goalkeeper Matt Gilks.

Posh were eventually punished when Thomas met Ince's ball from the left to send it past Robert Olejnik.

Brisley's foul on Ince allowed Blackpool to extend their lead from the spot.

Alex Baptiste's backpass let Gayle score to give Posh hope after 70 minutes but Dicko and Ince dashed any hopes of a comeback.

"I have been delighted with the performances in every game since coming to the club, but it is obviously a relief to go away from a game with three points on the board.

"Of course I would have liked it to have come sooner but within the four walls of the dressing room we knew this result was coming because we have been dominating matches.

"And it was also nice to see a couple of substitutions pay off. Sometimes they can go against you, but today they worked well."

"It is impossible to come out and defend that second-half performance. It was one of the worst 45 minutes I've seen for a long time.

"Had we taken the golden chance in the first half then it may have been different, but any neutral watching that will have gone away thinking we are a team in trouble.

"The place was like a morgue because we didn't give our fans anything to lift them. We looked a beaten team the minute we fell behind and that is not something I can accept.

"We've got ourselves into this mess and we have to get ourselves out of it."