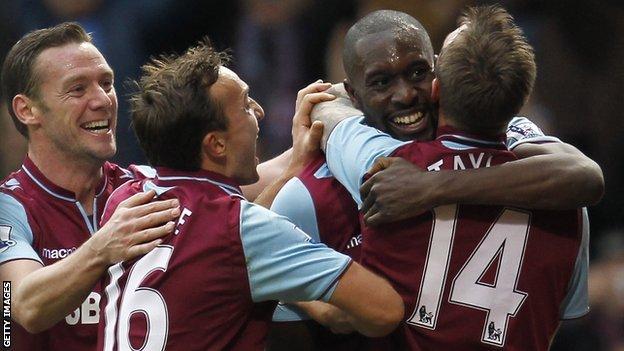 Chants of "sacked in the morning" and "one Di Matteo" rang out as Chelsea allowed a 1-0 half-time lead to slip, with West Ham roaring back thanks to goals from Carlton Cole, Mohamed Diame and Modibo Maiga.

"West Ham have beaten Chelsea for the first time since 2003 and how they've enjoyed it. What a turnaround. Chelsea were in control but only led 1-0 at the break. How they will rue their missed chances. West Ham manager Sam Allardyce made two changes and one of those was Mohamed Diame, who was key for his side. Another awful day for Rafael Benitez. A red letter day for West Ham."

Juan Mata fired Chelsea in front early in the first half and the visitors might have increased their advantage before the interval, only to see a series of good chances go to waste.

Carlton Cole headed West Ham level, before Diame fired in with a ferocious low shot. With time running out West Ham broke again, allowing Maiga to turn in a rebound.

It is the first time since February 1995 that Chelsea have failed to win for seven league matches and Benitez becomes the first manager since Gianluca Vialli to not win any of his opening three matches as manager.

Much of the focus after this game will fall on Benitez and Chelsea but West Ham were an unrecognisable team after the interval, with the introduction of Diame crucial in changing the game.

Chelsea will struggle to know how they let this one slip. Sharper to the ball and swifter to use it, they bossed the early stages, although it took until the 13th minute for them to construct their first meaningful attack.

Victor Moses gathered the ball wide on the right and, seeing Torres angling his run behind the West Ham backline, found his team-mate with a cleverly weighted pass. In one fluid movement, the struggling striker cut the ball back across goal where Mata stroked it beyond goalkeeper Jussi Jaaskelainen. The move was a study in simplicity.

Chelsea's attacking play was creative, clever and, at times, rapier sharp. The West Ham defence was shredded time and again, as Torres, Moses and Mata were each presented chances that they contrived to waste. And yet, the hosts clung on.

Mark Noble fought for everything in the engine room, Matt Jarvis turned and twisted and Kevin Nolan provided the spark in attack.

As half-time approached Chelsea goalkeeper Petr Cech was booked for punching outside his area. James Collins's resulting free-kick deflected up, allowing James Tomkins to head on to Nolan, whose powerful header was tipped over.

The introduction of Diame gave West Ham another dimension. The confidence and swagger which had accompanied Chelsea's play in the first half deserted them as the contest turned into an altogether more muscular affair.

Where West Ham had stood off and allowed Chelsea to dictate, now they snapped in and fought for everything. Carlton Cole had wasted two earlier chances but when Jarvis's cross deflected up off Gary Cahill, he reacted before Ivanovic, to stoop low and head firmly beyond Cech at the near post.

Jarvis tested Cech moments later. Chelsea were being forced back time and again but their attacking threat remained nonetheless. Eden Hazard forced Jaaskelainen to turn his fierce low shot away, only for Torres to prod the rebound straight back at the West Ham goalkeeper.

Moments later, Mata clattered Jaaskelainen's left-hand post with a delightful 25-yard free-kick. West Ham were at it too, however, as first Jarvis raced clear only to see his shot brilliantly saved by Cech before Ashley Cole cleared Winston Reid's header off the line.

But West Ham would not be denied.

Carlton Cole's clever pass found Diame on the edge of the box and his shot flashed beyond Cech and into the net.

Chelsea were all over the place and when Matthew Taylor's shot was deflected back to Maiga, the West Ham forward made no mistake to complete an incredible comeback.