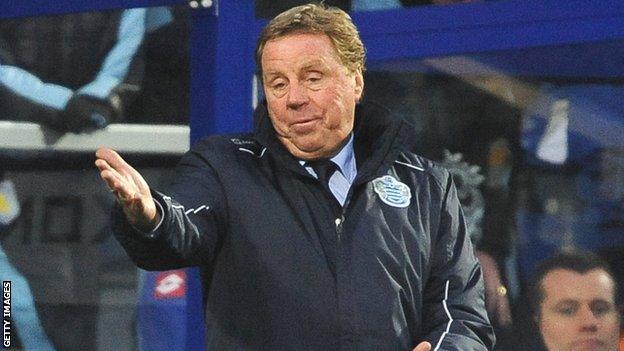 Queens Park Rangers are still searching for that elusive first Premier League win of the season as first home game in charge ended in a draw with Aston Villa.

Brett Holman fired Villa into an early lead from 20 yards - but Jamie Mackie headed QPR level before the interval and they created the better opportunities to finally secure three points.

Shaun Wright-Phillips hit the post and was denied when clean through by Villa keeper Brad Guzan, who also saved well from Ryan Nelsen and Samba Diakite. Clint Hill also struck the woodwork with a second-half header.

Redknapp will draw encouragement from the creation of those chances but sooner or later QPR must start to collect victories.

Villa boss Paul Lambert selected Darren Bent as a substitute after he was excluded completely for the win against Reading, but the England striker remained unused.

QPR have equalled the longest run from the start of a Premier League season without a win. Swindon went 15 games without victory at the start of the 1993-94 season. The campaign ended with relegation.

Redknapp was given a predictably warm reception when he was introduced to QPR's fans - but the cheers were soon silenced as Villa took the lead.

Holman was given far too much time and space to try his luck from 25 yards and he was rewarded as Robert Green - retained in goal after deputising for Julio Cesar when he was injured during the - made good contact with the shot but could not keep it out.

It was a worrying moment for Redknapp but QPR finally found some rhythm and were level after 18 minutes when Mackie showed excellent movement in the area to send a fine header beyond Guzan from Diakite's cross.

Wright-Phillips, recalled by Redknapp, twice had opportunities to justify his manager's faith but could not produce the second goal. He was blocked by Guzan when he raced clear, then struck the base of the post with the American keeper beaten.

QPR were forced into a change before the interval when Stephane Mbia was left lying motionless after an accidental collision with Gabriel Agbonlahor. He was treated for several minutes before being taken off on a stretcher and replaced by Shaun Derry.

Redknapp made a switch at half-time, sending on Park Ji-sung for Esteban Granero as QPR went in search of victory.

Guzan came to Villa's rescue again as the home side maintained the momentum, leaping to his left to claw away Nelsen's shot then saving low from Diakite.

Park then had the best chance of all as he broke free in the area but his finish was at a comfortable height for Guzan, who was once again equal to the task.

QPR had posed all the attacking questions and were unlucky again as time ran out, with Hill rattling the bar with a header.

QPR manager Harry Redknapp: "We played well, and after a difficult start we came back and dominated the game, we had all the chances and deserved to win the game. We just couldn't get the second goal.

"We are in a difficult position but you've got to keep going believing, working hard, we need that first win to get us going. We needed it today but it didn't come and we need to try hard to get it next week against Wigan."