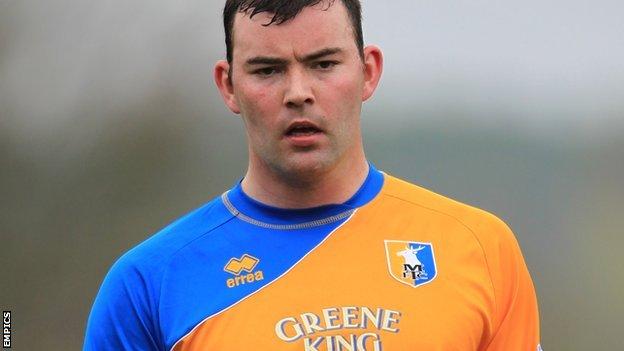 Matt Green put the Stags ahead when he scored after capitalising on a short back-pass from Imps' Andrew Boyce.

Alan Power equalised with a 25-yard free-kick and Jamie Taylor put Lincoln ahead from close range after Mansfield failed to deal with a Boyce long throw.

Louis Briscoe's 20-yard shot made it 2-2, Lincoln retook the lead when Power followed up after Taylor's parried shot but Rhead's header forced a replay.

Rhead's goal came in the third minute of stoppage time but, in a thrilling FA Cup second round tie, there was still time for more drama as Lincoln's Vadaine Oliver had a shot cleared off the line.

The two sides will meet again in the replay next week as Lincoln aim to reach the third round of the FA Cup for only the second time in 14 years, while Mansfield try to reach that stage for the first time since 2007-08.

"We were so nearly there but I give credit to Mansfield for sticking at it.

"I thought the togetherness shown by the players was extraordinary.

"We had to do it the hard way against Walsall and we'll have to do it again now but we won't be scared going to Field Mill.

"If we can keep fit we will go there and have a good night."

"What a game of football. I think for every supporter that was in the ground it was a proper football match.

"When there's local derbies and a lot at stake, usually you get a stalemate.

"But you had two teams that just went at each other's throats and I think for both sets of supporters it was a cracking cup tie."