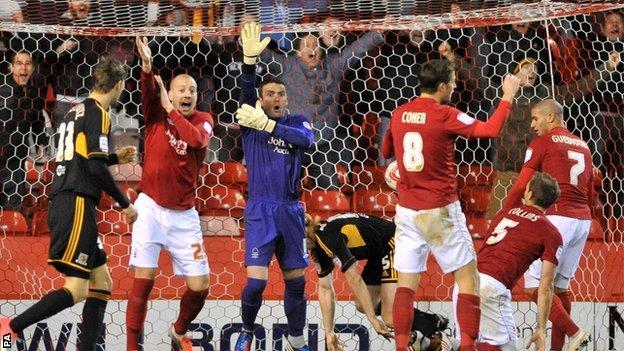 A dull first half came to life just before the interval as both sides scored from the penalty spot.

Robert Koren put the Tigers ahead after David Meyler was upended by Simon Gillett, only for Billy Sharp to level after he was fouled by Alex Bruce.

The defeat was Forest's second in a week following Tuesday's loss at struggling Ipswich and leaves them four points adrift of the Championship play-off places, while the Tigers have moved up to fourth place prior to Leicester's evening kick-off against Derby.

Hull had the better of what few chances were on offer in the opening 30 minutes, with Forest's Elliott Ward having to clear a corner from under his own bar and Meyler shooting into the side-netting.

But the Reds equalised when Sharp showed his composure with a powerful penalty into the top right-hand corner of the net.

Chris Cohen might have sent Forest into half-time ahead, but the midfielder blasted the ball over from close range after his initial flick from Andy Reid's cross was blocked.

The match improved slightly after the break with early chances at both ends.

Adlene Guedioura curled a shot just wide and had a goalbound effort blocked for the hosts while Ahmed Elmohamady shot straight at Camp.

Forest were dominating possession but creating little and the visitors made them pay when Koren's corner found McShane who bundled home from two yards.

"It was a tight game but they are a decent outfit who play good football and are difficult to play against.

"It was a bit of a chess match between us and I thought we were bright and intelligent and upped it a notch in the second half but conceded a goal that should not have been."

"We feel as though we should be competing at the top end of the division and where we are at the moment is very pleasing.

"What we have to do is find the consistency we would like to see over a period of time because when we have had a good run of results something has gone wrong.

"It would be nice if we could now take it on from this result and go through December remaining unbeaten."