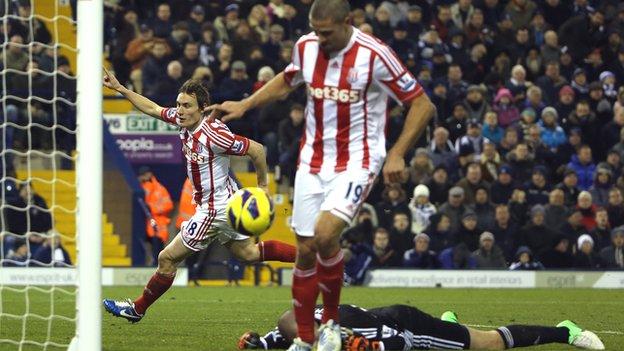 The Potters frustrated their hosts with an impressive defensive display in an uneventful and uninspiring game.

Neither side created clear chances but Stoke were happy to soak up pressure.

And Whitehead steered the winner in from fellow substitute Michael Kightly's cross after great perseverance by Kenwyne Jones.

Jones did brilliantly to pressurise Jonas Olsson on the right flank and Whitehead was able to profit to give Stoke a first win on the road in the top flight since they beat Blackburn Rovers last January.

Their fourth victory from five games sees them move up to ninth in the Premier League table, while the Baggies slipped to back-to-back league defeats for only the second time this term.

West Brom manager Steve Clarke had insisted there was no need to be concerned by the subdued display in the midweek defeat against Swansea.

And although they had the majority of possession and territory - particularly after the interval - they barely created a chance.

Stoke had the second best defensive record in the Premier League prior to their trip to the Hawthorns and it was easy to see why after a thoroughly disciplined first-half display.

The Baggies went into the game having won six out of their seven home league encounters, but despite having the ever-impressive striker Shane Long back in the starting line-up, they created almost nothing before the interval.

An audacious quick Steven Reid free-kick from the half-way line was the closest they came but Potters keeper Asmir Begovic was alert to the danger and able to tip the ball over.

Apart from Reid's clever effort, and a couple of threatening moments after good work by Youssouf Mulumbu and Graham Dorrans, the Baggies were unable to break down a stubborn Stoke defence brilliantly organised by Ryan Shawcross and Robert Huth.

It was the visitors who had the best opportunity of the first half but Jones, making his first league start of the season in place of the injured Peter Crouch, was unlucky to see his fine header drift just wide from Charlie Adam's floated cross.

Stoke continued to defend deep after the interval and seemed happy to allow West Brom to have the bulk of play and territory and deny the pacy Long space in behind.

It was game full of energy and endeavour but not too much in the way of quality. West Brom struggled to create chances as Stoke defended brilliantly and that platform allowed Dean Whitehead to grab the winner - his first goal in 59 games.

And the tactics worked brilliantly, as did Tony Pulis's decision to bring on Whitehead and Kightly.

Jones chased a long ball and, after Jonas Olsson wasted two opportunities to clear his lines, Kightly was able to knock the ball across to Whitehead who finished from six yards.

The Baggies had already brought on both Peter Odemwingie and Romelu Lukaku as they looked for a winner, but Stoke stood firm in the final 15 minutes.

Their only chance saw a decent Dorrans strike comfortably palmed away by Begovic as the Potters were able to hold on for a seventh clean sheet of the season with relative ease.

"It wasn't a game of many chances and was the game I expected. The two teams cancelled each other out and it cannot have been great to watch.

"They are organised all the time. They are hard to break down and chasing a goal against them is really difficult. It was a little bit frustrating but I can't fault the players. The effort was great.

"We made some changes as we had two very difficult trips. I have a good squad and there are players that deserve to play and players that are tired. It was the right time to freshen things up.

"We haven't been carried away in the dressing room. We knew there would be bad moments in the season and two defeats in a row are as bad as it has got so far.

"I have no doubts about the players' character. The first target is still 40 points and we look forward to the next game."

"It was a great result because we haven't won away from home this season. We have drawn four away but could easily have won a couple of those. Every one of the players who played gave it everything.

"West Brom are a good side and very good at counter-attacking - as good a team at that as I have seen this season. We didn't want to get too stretched or over-exposed. We were quite happy to let them have the ball and try to counter-attack. We wanted to make sure they didn't get behind us.

"We didn't want to lose the ball in bad areas. They play between the lines very well. We are delighted to get a clean sheet and win the game.