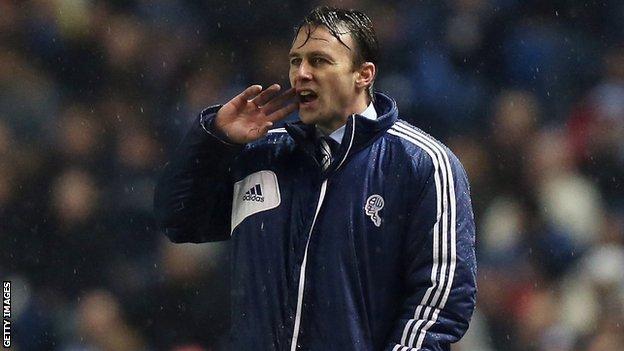 Dougie Freedman suffered his first defeat as Bolton manager as Michael Chopra grabbed a last-minute winner for Ipswich at the Reebok Stadium.

A 25-yard strike from Mark Davies put Bolton ahead before DJ Campbell scored a penalty, awarded for a Tyrone Mears foul on Daryl Murphy.

Substitute Chopra secured the win after a mistake from goalkeeper Adam Bogdan.

It was a fourth win in seven games for Ipswich boss Mick McCarthy, moving them five points clear of the drop zone.

Bolton went into the match unbeaten in their first six games under Freedman - a post-war record for a new Wanderers manager.

Despite an impressive display in a 2-1 win at Blackburn during the week, Freedman made three changes to the Bolton starting line-up - recalling Mark Davies following suspension and restoring David Ngog and Marcos Alonso to the starting line-up.

And the changes seemed to have paid off when Davies exchanged passes with Jay Spearing before unleashing a sublime shot that dipped into the top corner.

Despite dominating the first half Bolton were unable to add to their lead.

McCarthy's side grew into the game after the break, drawing level with 20 minutes to play.

Bradley Orr played the ball in to Daryl Murphy who nutmegged Zat Knight before being brought down by Mears.

And it was left for Chopra to score his third goal of the season, with Ipswich recording back to back wins for the first time since March.

Bolton boss Dougie Freedman: "Ipswich thoroughly deserved to win the match and we've got no complaints.

"I felt for 70 minutes we played very well and were the better team because we were creating opportunities. We probably actually did enough to win the match.

"We didn't take those chances though, and in the last 15 minutes we were a bit edgy. That gave them the impetus and the chance to make us pay and they did that to us in the end."

Ipswich boss Mick McCarthy: "I'm delighted with the win and I really wanted to win this game.

"I thought that it was fairly even throughout and in the end that the three substitutes we brought on won it for us.

"It's really cliched but you've just got to take it one game at a time. There is a good spirit here now which wasn't here when I first came.

"There was a lot of finger pointing then but now we all seem to be pushing in the right direction. We're nowhere near to safety just yet though, and we just need to keep looking to pick up maximum points."