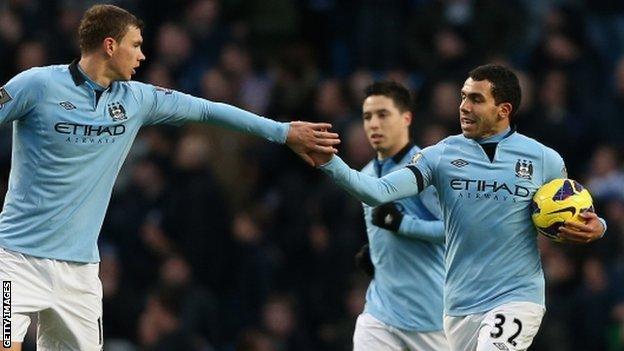 Manchester City continued their unbeaten start to the Premier League season but had to settle for a point against a battling Everton side.

Carlos Tevez levelled from the spot after Fellaini dragged down Edin Dzeko.

City had the better of a tight second half but struggled to create chances and Everton almost snatched victory with Nikica Jelavic's free-kick.

The draw was enough to send Roberto Mancini's side to the top of the table on goal difference, at least until Manchester United play Reading in Saturday's late game.

It will still be viewed as two points dropped in the title race, especially as City had won 29 of their last 31 home league games ahead of the visit of the Toffees.

But David Moyes' fine record against Mancini, who has now only won only one of seven meetings with Everton, always suggested things would not be straightforward for the champions.

Both sides began cautiously, with the game getting bogged down in a midfield battle until Everton took the lead just after the half hour mark.

Vincent Kompany could only flick on a whipped Leighton Baines cross and, although Hart kept out Fellaini's initial header with a fine reflex save, he was helpless to stop the Belgian bundling the rebound in with his thigh.

City responded by fashioning their first real chances of the game, with Tim Howard clawing away a Tevez header and then turning Dzeko's snap-shot around his post.

The corner that followed saw Fellaini concede the controversial penalty that led to City's equaliser, with Dzeko going to ground after having his shirt tugged by the Belgian.

Referee Lee Probert pointed to the spot and Tevez stepped up to fire down the centre of the goal.

Everton still ended the half on the attack, with Fellaini forcing a sprawling save from Hart just before the interval, but the Toffees were firmly on the backfoot afterwards.

Only frustration was to follow for City, however. They dominated possession but could find no way through Everton's determined defence and their only effort on goal saw Howard push away Maicon's swerving shot.

The home fans could not understand Mancini's decision to replace the hard-working Tevez with Sergio Aguero as he juggled his attack.

In truth, the Argentine's introduction, as well as that of Mario Balotelli, had little impact - Everton were just too well organised at the back.

A difficult afternoon for City could have been worse - Hart had to readjust when Jelavic's free-kick bounced in front of him, and he only just managed to push the ball around his post.

But a draw - Everton's seventh in their last nine games - was probably the fairest result.

"In the second half we played better, probably deserved to score another goal.

"In the end we are not happy but the season is long and this doesn't change anything.

"If you don't pay attention you can lose three points and it is sometimes better to take one."

Everton manager David Moyes on Manchester City's equaliser: "It is not a penalty kick.

"You can't be giving ones like that. There'd be a penalty every time there's a corner kick.

"The fourth official told me that it was given for a foul by Leon Osman, so I've got my doubts if the referee saw the incident. But even if it was Fellaini, it's not a penalty kick, nowhere near.

"They say it levels itself out. We'll see."