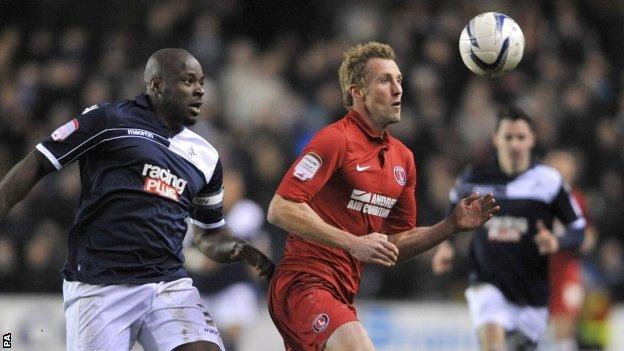 Millwall had to settle for a point from a hard-fought south London derby with Charlton that saw both sides extend their unbeaten runs.

The Lions dominated early on, with Liam Feeney and Chris Wood both off target when well placed.

Dany N'Guessan went closest to putting Millwall ahead after the break with a close-range header that was cleared off the line by Chris Solly.

The result means Charlton are undefeated in six games, while the Lions - who drop out of the Championship play-off places - extended their unbeaten run to 13 matches.

Millwall had enough chances to win the game, however, starting when Chris Taylor was unable to hit the target with a weak header from Feeney's cross.

Feeney wasted an even better opportunity soon afterwards, failing to make proper contact with Andy Keogh's cross at the back post.

Wood was guilty of another bad miss when his weak close-range effort failed to trouble Ben Hamer in the Addicks goal.

The visitors improved after half-time, leading Lions boss Kenny Jackett to replace Feeney with N'Guessan midway through the second half.

Keogh forced Hamer into a fingertip save with a stinging drive, before Josh Wright's corner led to N'Guessan's header that Solly did well to keep out.

Millwall manager Kenny Jackett: "I thought it was a dominant performance, barring the finishing.

"In the second half, I don't think Charlton got out of their half. I can't remember them having a shot, but it didn't quite drop for us in the box. Perhaps we needed a spark of creativity.

"I'm pleased with the players. A lot of our game was right and it gives me as a manager, good encouragement for the future."

Charlton manager Chris Powell: "They stood up to the test and it's quite an intimidating place.

"This place will test your resilience and bravery and my team was full of that, especially the centre backs and keeper.

"We didn't create much but we're playing against a side in good form. I thought we were competitive and it was a performance full of bravery.

"Whether we had that moment of quality to win the game is questionable, but I'm happy we've walked away with a point unbeaten. There were no winners today and no bragging rights for anyone in the office."