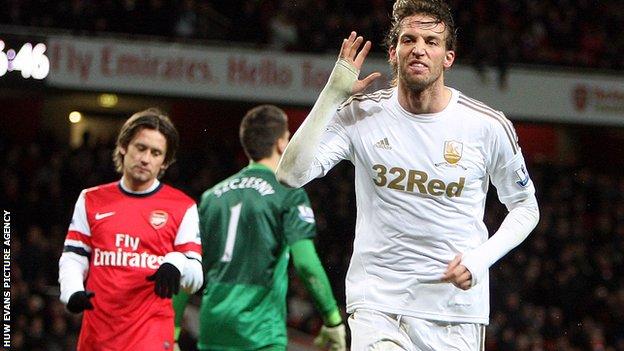 Gervinho wasted Arsenal's best chance when he made a mess of a free header in front of goal.

The midweek draw at Everton had already given Arsene Wenger his lowest points tally at this stage of the season - 21 points from 14 games - since taking over at Arsenal 16 years ago.

The groans of discontent were loud and clear as his players trudged off after another toothless display that leaves them five points behind fourth-placed rivals Tottenham.

Arsenal improved considerably after a poor first half as they starved Swansea of possession, but Michu's double strike as the game began to peter out gave them no chance to recover.

His controlled left-footed finishes took his tally to 11 for the season, further emphasising the bargain price of £2m Swansea paid to take him from Rayo Vallecano in the summer.

Wenger had targeted this game - the first of four at home from the next six - as a springboard to climb up the table and back into the title race.

But those hopes now lie in tatters and it will be Swansea who will be looking upwards as they move to within three points of the top four.

"Swansea were superb in the first half; Arsenal better in the second but not good enough. And the difference between the two sides was Michu - two chances right at the end that he took with aplomb."

There were early warning signs for Arsenal as the visitors began playing with a confidence borne from manager Michael Laudrup's instruction to express themselves without the constraints of pressure.

Sharp, intricate passing released full-back Angel Rangel behind the static Arsenal back four, but Szczesny was alert to save his first effort and then block the second shot on the rebound.

The Gunners were then indebted to a last-ditch lunge from Thomas Vermaelen to deny Dyer, whose hesitation after running free from the halfway line gave the Arsenal captain a chance to recover.

Despite a lack of invention, pace and fluidity, Arsenal could easily have scored twice before half-time through Gervinho.

The striker was inches away from connecting with an inviting cross from Carl Jenkinson, but then got it all wrong when left unmarked six yards out.

So poor was Gervinho's attempt that Theo Walcott retrieved the ball before it went out for a throw-in.

The Gunners finally showed some urgency and appetite after the break, quickly forcing Gerhard Tremmel into a first save when Santi Cazorla delivered a low drive.

Two half-hearted penalty claims were then waved away before Szczesny continued his personal duel with Rangel to deny him with another fine save.

Giroud was brought down by a desperate Chico Flores lunge on the edge of the area, but Clattenburg saw the faintest of touches from the Swansea defender.

Arsenal continued to probe, and Swansea were fortunate that Vermaelen's far-post header went straight at Tremmel.

But having offered little after the break, the Swans struck with ruthless efficiency to snatch all three points.

A simple one-two was enough split the home defence to release Michu for the first, and his lifted side-foot finish beat the out-stretched hand of Szczesny.

Another incisive finish followed two minutes later after Jenkinson's attempted backpass was deflected into his path by the tenacious Dyer, leaving Swansea to celebrate only their second away win over the Gunners.

Arsenal manager Arsene Wenger: "We are in this job to turn things around, and I am confident we will [because of] the quality of the players and the spirit we have in the team.

"It is a good moment to stick together.

"I am not so much worried about [league] places, even if that is not the place you want to be, but I believe what is important is we get the quality of our game back. Then the places change."

Swansea City manager Michael Laudrup: "There have been three great performances, each better than the [previous] one.

"The team is playing with a lot of confidence. They [Arsenal] put us under pressure for 20 minutes in the second half and you know their players can make the difference at any moment, so you can never sit easy.

"We looked in quite good shape and were only defending deep a few times."