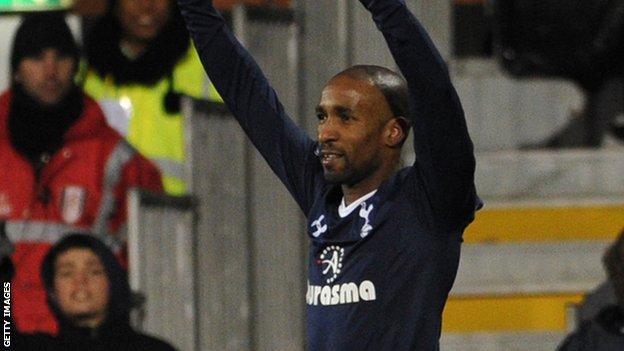 Fulham keeper Mark Schwarzer was at fault as Sandro opened the scoring from 30 yards following a goalless first half, before Defoe struck from close range to make it 2-0 soon after.

The hosts struggled to respond and Defoe added a third after a pass by former Cottagers player Clint Dempsey.

Tottenham's Gareth Bale was booked for diving for the second straight game.

Defoe, 30, showed he is a striker in form, his second goal a well-executed low effort to confirm he is one of the best finishers in the Premier League.

The England international - capped 52 times by his country - has 14 goals in all competitions this season. In total, he has 128 goals for Tottenham, five behind Alan Gilzean, who is the club's seventh all-time leading scorer

But victory came at a cost for Tottenham, who recorded a rare clean sheet in the league.

Defender Michael Dawson went off injured and had to be replaced in the first half, while in-form Bale also failed to finish the match after appearing to suffer a hamstring problem.

Jermain Defoe confirmed he is the best English finisher in the Premier League at the moment with two more goals as Tottenham picked off Fulham after half-time with three goals. Fulham, who can have few complaints about the outcome, were unable to take advantage after the visitors lost Gareth Bale to injury

It turned out to be an eventful afternoon for Bale, who was booked for the seventh time this season.

Referee Chris Foy had no hesitation in cautioning the Wales international in the 24th minute for diving after a challenge with Steve Sidwell.

Yet Bale had cause to feel aggrieved by Foy's decision as he appeared to be fouled by Fulham's former Aston Villa midfielder.

This was very much a case of friends reunited on the banks of the River Thames - Tottenham's Dempsey and Mousa Dembele lining up against their old club while Fulham, managed by former Spurs manager Martin Jol, had ex-Tottenham striker Dimitar Berbatov in attack.

Berbatov rarely threatened as Tottenham picked off the hosts after a goalless first half.

Sandro broke the deadlock in the 55th minute with a low, long-range attempt that Schwarzer will feel he should have kept out.

There were concerned looks from the Tottenham bench when Bale hobbled off but Defoe struck twice in five minutes to cement the points.

His first goal came after intelligent play by Bale's replacement Gylfi Sigurdsson in the 72nd minute while his second, after Dempsey's excellent threaded pass, was a quality low finish from 12 yards out.

Fulham had their chances - none more so than when Mladen Petric was denied by Hugo Lloris from close range following John Arne Riise's early low cross.

But Jol can have few complaints about the outcome against his former club.