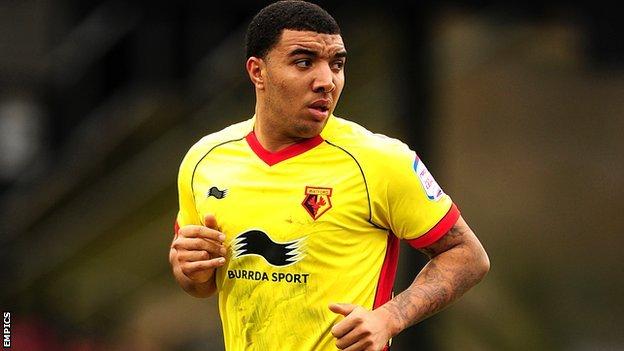 Troy Deeney's brace in his 100th game for Watford helped the Hornets win their fifth Championship game in seven, and leave Barnsley winless in nine.

The striker's first, a 10th minute header, was added to by a clinical Mark Yeates finish after half-time.

Deeney's second from 16 yards and a Matej Vydra penalty sealed the win.

Marcus Tudgay struck late on but it proved little consolation for the visitors, who are now only two points clear of the bottom three.

Deeney's seventh and eighth goals of the campaign demonstrated the good form the forward is in, and why Watford boss Gianfranco Zola opted to promote him from the substitutes' bench.

The Italian manager's selection paid early dividends, with the 24-year-old able to create time and space for himself inside the Barnsley box on 10 minutes.

The striker then rose largely unopposed to convert Marco Cassetti's corner, the fourth time in three matches that the visitors had conceded from a set-piece.

Barnsley rallied, though, and went close with chances following a pair of Akos Buzsaky corners, but neither Craig Davies nor Tudgay were able to capitalise.

And the Tykes were punished after the interval when midfielder Yeates received the ball at a very tight angle before brilliantly finding the bottom corner of Luke Steele's net.

That strike spurred on the hosts, on-loan Udinese forward Fernando Forestieri teeing up Deeney for his well-taken second.

Hornets substitute Vydra rounded off a one-sided second half by converting an 83rd minute penalty after he had been hacked down from behind by Jimmy McNulty.

Barnsley's Tudgay scored his second goal in as many matches with a smart finish in stoppage-time, but it counted for little as Watford climbed to sixth in the table.

"Obviously we are delighted.

"There's a good atmosphere at the ground with the players and with the supporters.

"But we need to make sure we keep the balance because there's a long, long way to go and this Championship you cannot afford to lose concentration."

"We made some horrendous decisions in and out of possession. The best team won and I've got to congratulate Gianfranco because I think he's got an excellent side.

"We looked weak against the opposition so I don't think we were ever in the game. Individually and collectively, we weren't cohesive today, with and without the ball."