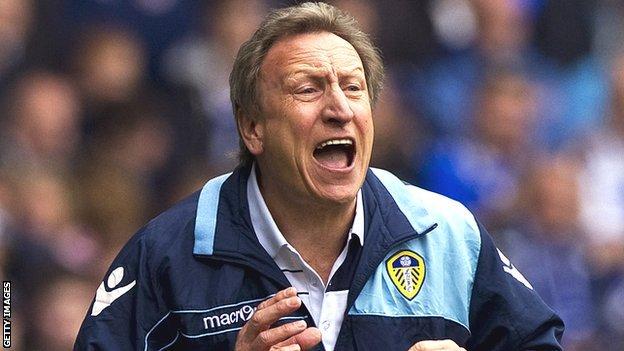 A brace from Luciano Becchio gave Leeds a deserved victory in an action-packed Yorkshire derby at Huddersfield.

After an assured finish from Chris Atkinson had put the hosts in front, Leeds hit back with two goals in a minute from Michael Tonge and Becchio.

Town equalised from the spot through former Leeds man Adam Clayton to leave the scores level at the break.

David Norris volleyed Leeds back into the lead and Becchio's superb header sealed it.

This was the first West Yorkshire derby between the two sides in the second tier for 25 years and it was the hosts who drew first blood.

Leeds boss Neil Warnock, who guided Town to promotion in 1995, will have been livid with his side's defending to allow Atkinson to latch onto a lovely through ball from former Leeds man Clayton and slide a finish beyond Paddy Kenny.

Leeds' three wins in a week

Atkinson, recently recalled from a loan spell at Chesterfield to cover for the suspended Keith Southern, started the game brightly and should perhaps have done better with an 18-yard half volley that he struck straight at Kenny.

The visitors were gifted an equaliser when home keeper Smithies somehow contrived to let Tonge's tame 18-yard effort squirm under his body.

That howler rocked Town and moments later it was 2-1 to Warnock's side. Ross McCormack got behind the Huddersfield defence and teed up strike partner Becchio to send a sublime finish beyond the despairing dive of Smithies from the edge of the area.

With the frenetic pace showing no signs of abating, the Argentine went from hero to villain before the interval.

He was adjudged to have pulled back Town skipper Peter Clarke in the area and Clayton sent Kenny the wrong way from the spot. The midfielder, sold by Leeds in the summer, sprinted half the length of the pitch to celebrate in front of a furious Warnock.

The second half started as the first ended with chances at both ends, Alan Lee heading a Danny Ward corner over for Town before Jerome Thomas was just off target with a volley.

Leeds retook the lead with 20 minutes remaining. Substitute Ryan Hall did well to cut the ball back to Norris, whose low volley found the bottom corner in front of the travelling fans.

Simon Grayson, sacked by Leeds in February, was unable to inspire a response from his Town charges and Becchio sealed bragging rights for the Elland Road side with a powerful header from another Hall cross.

With home supporters heading for the exits, Leeds fans - who have now seen their team record three successive wins - were left chanting "we are going up". On this evidence they could yet be correct.

Huddersfield boss Simon Grayson: "We started the game very well and we had a great purpose about us. After we scored we stopped doing a lot of those good things.

"We don't blame Alex Smithies for his mistake. He's made a number of good saves for us over the time.

"We never really created any chances in the second period which was disappointing.

"They were sharper than us and won more of thier individual battles but our younger players will learn from it. We have to bounce back against Bolton next week."

Leeds boss Neil Warnock: "They dominated early on but then we got back into it, although we were fortunate with the equaliser.

"The lads have been on fire all week and you can see today how good some of the finishing was today.

"At half-time we talked about not letting them back in the game because the penalty was stupid.