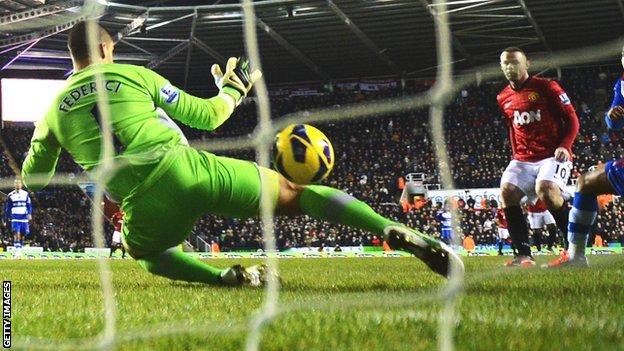 Manchester United remain top of the Premier League after beating Reading in a remarkable seven-goal thriller.

United fell behind when Hal Robson-Kanu lashed in but hit back via Anderson's finish and a Wayne Rooney penalty.

The Royals reclaimed the lead when Adam Le Fondre and Sean Morrison both headed in from corners.

The visitors swung the game their way through neat finishes from Rooney and Robin van Persie, who also had a shot that crossed the line not given.

United came into the game knowing a point would be enough to return them to the top of the Premier League table.

Ferguson's men had been boosted by the results of Saturday's earlier games. Manchester City only drew 1-1 at home against Everton, while Chelsea were beaten 3-1 at West Ham.

That the Red Devils extended their lead over their title rivals tells only half the story of a phenomenal game of football.

The Madejski Stadium has already hosted its share of see-saw goalfests this season and provides more questions than answers about the overall quality of this United side.

This match equalled the record for most first-half goals scored in a Premier League match. The only other games to feature seven goals before the break were Blackburn v Leeds (Sep 1997) and Derby v Bradford (Apr 2000).

The first half alone was an epic, showcasing seven legitimate goals, another wrongly adjudged not to have crossed the line, appalling defending that warranted a pre-half time tactical substitution and the kind of end-to-end football used to justify the Premier League's unofficial reputation as the best league in the world.

Reading may not be taking any points but they deserve their share of the plaudits for a committed contribution to a game from which any reward would have been a bonus in their quest to extend their top-flight stay to a second season.

The most notable examples of defensive frailty came from the title challengers, who fell behind to the first goal for the 14th time this season - when Jonny Evans's poor clearing header allowed Robson-Kanu time and space to lash in from close range - and then conspired to fall behind again midway through the half when identical Nicky Shorey corners were headed home in the box by Le Fondre and Morrison respectively.

Full-back Rafael was taken out of the action to be replaced by Chris Smalling, but in truth any one of the back five could have suffered the Brazilian's fate.

That United were not facing an uphill battle of the sort that endured Arsenal in the Capital One Cup owes purely to their potency at the other end of the field, where they retain the ability to carve teams open seemingly at will.

A slick one-two between Anderson and Ashley Young and a superb near-post finish from the Brazilian, followed by a calmly-converted penalty from Rooney after Jonny Evans was bundled over by Jay Tabb, overturned the Royals' first goal.

And Rooney's neat side-footed goal from a Patrice Evra cross, just before Van Persie's own tidy finish following a flick from his strike-partner, ensured they led at the break.

United should have had a fifth as well prior to the 45th minute when Van Persie's shot from close range crossed the line before being cleared by Shaun Cummings, but the officials ruled otherwise.

After a first half like that, the second was always likely to be a relative disappointment and so it proved with far fewer chances.

Van Persie spurned the best of them when he nipped in to capitalise on a poor piece of control by home keeper Adam Federici but after buying himself a yard to shoot the Dutchman unbelievably put his effort over the bar.

The miss ensured anxious closing stages for United but they demonstrated a resolve they had so sorely lacked earlier in the game to repel Reading's increasingly desperate attacks.

With Chelsea and West Brom both losing on Saturday it means the gap between second and third is now seven points, doing little to quash suggestions that this season is already shaping into a two-horse race between United and City.

Ferguson's side have their noses in front but the flaws inherent in their display at the Madejski means they have a lot of work to do before they can consider themselves favourites.

Reading manager Brian McDermott: "It was a fantastic effort and quality as well. I'm so proud of our players today.

"We know what our agenda is for this season. There is no problem with confidence from our players.

"I think we are becoming people's second team in the Premier League. We want our results to match our performance and hopefully that will come. Hopefully it is good to watch for our fans."