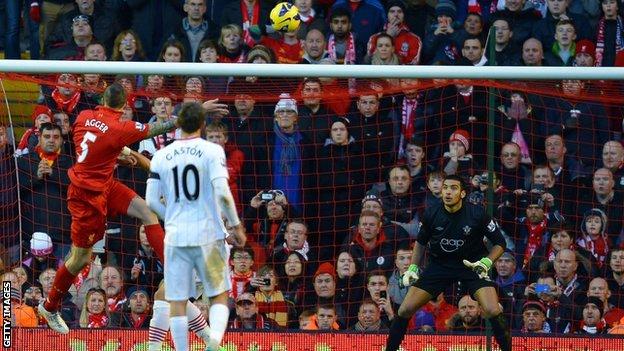 The Reds had the better of the chances and a Jonjo Shelvey strike hit the post, while a Luis Suarez free-kick came back off the crossbar.

Agger finally rewarded his side's play when he headed in Glen Johnson's cross.

Although the scoreline suggested a slender win, it was a convincing victory for a Liverpool side which had most of the play only to leave themselves vulnerably placed by not adding to their lead.

However, Southampton rarely looked like breaking through the Reds' rearguard as the attack-minded quartet of Lambert, Gaston Ramirez, Adam Lallana and Jason Puncheon struggled to make their presence felt.

The defeat checked the recent improvement of the Saints as their unbeaten four-game streak came to an end.

Liverpool boss Brendan Rodgers will point to back-to-back league wins at Anfield for the first time since September 2011 as further signs of the progress his team are making.

There was a minute's applause before kick-off for Liverpool under-nines' player Stephen Packer, who passed away after losing his battle with cancer

Having seen Southampton striker Lambert fire a 25-yard shot wide, Johnson sliced a near-post shot across the face of the goal from a Suarez cut back.

Johnson's energy and enterprise on the right flank was a constant source of threat and the defender also had a left-foot shot saved after cutting inside.

Liverpool midfielder Steven Gerrard has come in for criticism from some quarters after scoring just once in the league so far this season but, while he may not be as clinical in front of goal as in previous seasons, he is still intrinsic to his side's game.

His prompting of the play and range of passing can still hurt the opposition and Gerrard went close when a goal-bound 15-yard shot was cleared by Morgan Schneiderlin.

Gerrard set up fellow midfielder Shelvey for a powerful shot but the 20-year-old saw his effort come crashing back off a shuddering post as the home side's frustrations continued to mount.

"Liverpool dominated possession and you can't say on the balance of play that they didn't deserve their win but they did make hard work of it. Liverpool had plenty of other chances but it finishes 1-0."

Suarez thought he might be in on goal after Saints centre-back Jose Fonte failed to deal with goalkeeper Pepe Reina's long ball forward but visiting keeper Paulo Gazzaniga got a vital touch before the ball was put out for a corner.

Suarez bent a free-kick against the crossbar and, while he was ruing the home side again being denied, Johnson crossed for Agger to head the Reds deservedly in front.

Apart from Lambert's half-volley from 40 yards, which forced Reina into a smart save, Southampton failed to exert any real goal threat, with the returning midfielder Lucas Leiva giving Liverpool more protection.

Jose Enrique, back to playing in his more accustomed left-back position, poked a shot wide and a powerful drive saved by Gazzaniga.

Suarez also put a shot wide when well-placed and Liverpool's ability to play without him will be tested in their next game against West Ham when he will be suspended after picking up his fifth yellow card.

"The game should have been put to bed well before it was.

"No matter how much you dominate the game, if it's still only 1-0 going into the final 10 minutes it can always offer you a bit of a challenge where you have to defend.

"There's no question we should have been out of sight, but the most important thing is it was a terrific performance and another win at Anfield. We continue with another three points and moving up the league."

Southampton boss Nigel Adkins: "We have come away from home in a good run of form of late but Liverpool's movement was very good and we couldn't get a grip of the football.

"If we could have got to half-time at 0-0 that would have been pleasing but a free header in the penalty area has given them a 1-0 lead.

"Credit to the players because we managed to hang in there and the last 10-15 minutes we went a lot more direct."