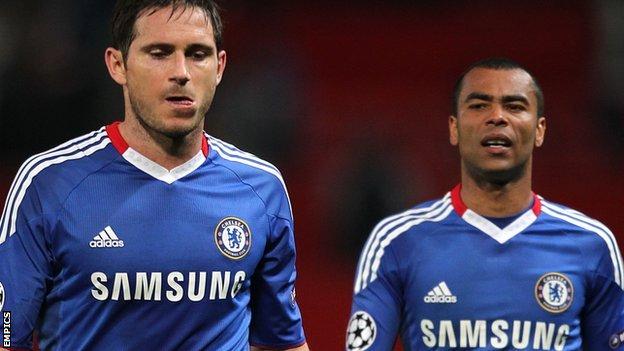 New Chelsea manager Rafael Benitez has suggested midfielder Frank Lampard and left-back Ashley Cole could leave the club at the end of the 2012-13 season.

Lampard, 34, and Cole, 31, have both failed to agree extensions to their current Stamford Bridge contracts.

Benitez, who replaced Roberto Di Matteo as Chelsea boss this week, admitted the pair could leave the club next summer.

Asked if he thought they would be moving on, Benitez said: "I think so. I think that's the case at the moment."

He added: "I don't have all the information, but it's not fair to tell me I'm only here for seven months and then expect me to have an influence at the club over the next two or three years."

The England duo's current contracts expire in the summer and they will be able to sign pre-contract agreements with rival clubs in the new year if they do not agree new deals before then.

Lampard, who has played for England 93 times, joined Chelsea from West Ham in 2001 and has gone on to become the club's third all-time leading goalscorer with 189 goals from 571 games.

He has won three Premier League titles, four FA Cups, two League Cups and the Champions League with the Blues and has been linked with a move to the MLS in America.

Cole, capped 99 times by England, has also won a Premier League title, the FA Cup four times and the Champions League since joining Chelsea from Arsenal in August 2006.

It could be the second successive summer where Chelsea have lost two of their key players on free transfers after strikers Didier Drogba and Salomon Kalou left Stamford Bridge earlier this year after failing to agree new contracts.