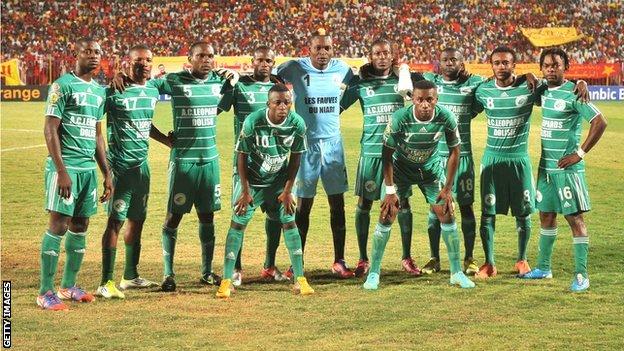 AC Leopards of Congo-Brazzaville are favourites to overcome Mali's Djoliba in Sunday's second leg of the Confederation Cup final.

The Congolese not only have two away goals from the first leg in Mali last weekend that ended 2-2, they also have home advantage and support from a sell-out crowd.

Leopards will further be boosted by the knowledge they easily beat Djoliba 3-0 when the Malians visited in the group stage of the tournament just last month.

Victory for Leopards would end a 38-year wait for a continental champion for Congo.

CARA won the 1974 African Champions Cup, the predecessor of the CAF Champions League, with a win over Egypt's Al Mehalla.

Although founded in 1954, Leopards only qualified for their first continental club competition in 2010.

Djoliba on the other hand are seasoned campaigners reaching the semi-finals of the Champions Cup in 1967 and also of the now defunct African Cup Winners Cup in 1981 and 1982.

Leopards have played in every round of this year's Confederation Cup and have a home record of six wins, a draw, a loss and a 14-5 goal tally.

Djoliba dropped down from the Champions League, which they joined in the second round.

In both competitions they have won three and lost three on their travels, but one of those wins was against local rivals Stade Malien.

The first leg of a final was a thriller with the Congolese leading and trailing before snatching a dramatic draw.

Leopards' 25 goals in 17 outings have come from 12 different players, with Rudy Guelord Bhebey-Ndey and Eric Nyemba grabbing four each.

Alou Bagayoko tops the Djoliba scorers' chart with four of the 15 goals in 11 matches followed by Idrissa Traore with three.

The winners will pick up US$660,000 in prize money and will also face Champions League winners Al Ahly of Egypt in the Super Cup next year.