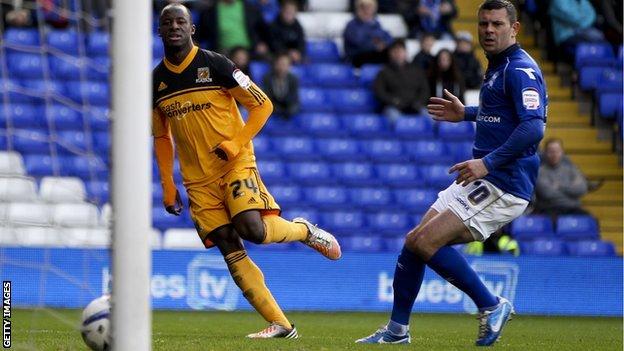 The 23-year-old has scored eight goals in 17 English Championship games for Hull this season.

"I've been monitoring Aluko's performance for Hull City and he's been having a great season," Keshi said.

Aluko's last game for Nigeria was in June as a substitute in a 2-0 over Rwanda in a Nations Cup qualifier.

He did not feature in Nigeria's 2014 World Cup qualifiers against Namibia and Malawi in June and missed the recent friendly win over Venezuela.

Keshi has revealed that he will give the player a chance to press for inclusion in his squad for the Nations Cup that runs from 19 January to 10 February.

"He was in camp with us in June but was not in shape. Sadly, he was also ill briefly which affected him," Keshi explained to BBC Sport.

"There were a lot of players around for the World Cup and Nations Cup qualifiers, so it was difficult for Aluko to prove himself.

"Does he have a chance to go to South Africa? Probably. I like him as a player and for being a top professional in camp."

Nigeria will play Angola in a friendly in Portugal and against Catalonia in the build-up to the Nations Cup.

"I already have an idea of the locally-based players that will make the final cut and those who are just not ready yet," Keshi said.

"We also have a couple of foreign-based players who were not with us but I will look at giving them a chance and see if they can stake a claim in the team.

"There is not a lot of time before the African Cup of Nations kicks off but I want to be extremely certain that everyone was given a look in.